Towns, Ecology, and the Land 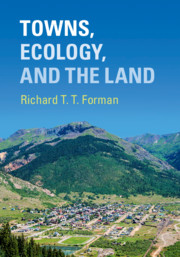 The focus of this book is the mosaic of towns, villages and interconnecting land that characterises landscapes worldwide, with emphasis on ecological and social connectivity and reciprocity. Such mosaics characterise almost half the global land surface and are home to approximately half the global population.

Part I (of IV) defines towns, villages and associated spatial patterns, examines the interactions between the landscape components and their temporal development, and describes the principal human elements such as town/village living, culture, employment, social patterns and planning.

In Part II, the focus is on the ecology of towns. Inorganic elements examined include soils, air and chemicals plus their origins, followed by water systems and water bodies. The organic elements comprise plants, habitats and green spaces, wildlife components, and domesticated species including dogs, cats and farm animals.

Finally, Part IV draws lessons from existing town-land relationships to establish principles for future management and development. Key factors/constituents are identified and reference is made to sustainable development and the ecological footprint.

Given that the latter is already considerable, and that population growth continues against a backdrop of global warming and its unpredictability, lessons need to be learned and policies established to enhance or at least maintain environmental quality at all spatial scales. This book provides valuable insights, through many and varied examples, to show the way.