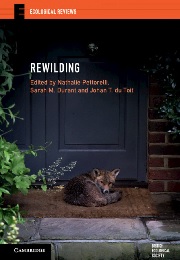 There’s been an explosion of interest in the rapidly-developing ecological concept of rewilding – or restoring land to its ‘natural’ state and allowing wildlife to return. Numerous rewilding projects are taking place worldwide, including significant projects in Britain, involving white-tailed eagles on the Isle of Mull and beavers on the River Otter in Devon.

Rewilding is a timely ecological review covering 20 key topics from 37 leading authors, providing both a comprehensive overview of the key concepts of rewilding and a scientific discussion of the latest research.
“Rewilding seems to tap into something critical at this time of ecological and political anguish, namely a hope that things can be improved”, say the book’s editors. They go on to explain that while there is general agreement that rewilding means unleashing nature to determine its own fate without human management, there are varying views on how to achieve this and what the risks are.

We learn that rewilding often requires human intervention to kick-start natural processes, such as tree planting and reintroducing "keystone species" (such as beavers). It can have many benefits, such as flood prevention, increasing biodiversity and helping to slow down climate change by carbon storage.

The chapters, each written by experts in their field of ecology, cover rewilding strategies such as land abandonment, land restoration, bringing back large carnivores, rewilding cities, and how to assess if rewilding objectives have been achieved.
An entire chapter focuses on Britain as a case study for rewilding, exploring the difficulties in applying this diverse concept to diverse areas of land - including the question of what ‘natural’ ecosystem we are trying to restore. The landscape of Britain has been shaped for millennia by agricultural practices, and 70% of the landscape is farmed in some way. Traditional farmed landscapes, such as protected traditionally grazed chalk grassland, are seen as valuable in themselves, and rewilding may not result in habitats with such characteristics.

In addition, the reintroduction of once-native species such as lynx, wolves, bears and beavers is seen by some as a threat to farming and safety. Further conflicts include the fear that there will be unpredictable outcomes and people will be excluded from open spaces.
People care passionately about rewilding, and following a petition with more than 100,000 signatures, in June MPs will debate returning twice as much land to wilderness as the government had already pledged to restore in Britain.

Rewilding is the first book to be published solely to explore the concepts, benefits and risks of rewilding in depth, and it will be a key resource for stakeholders and on undergraduate and graduate courses. It ends with an uplifting chapter on the future of rewilding that will foster nature and people in a changing world.