The Fall of the Wild: Extinction, De-Extinction, and the Ethics of Conservation 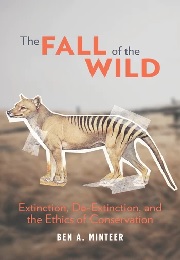 The most depressing passage of Adam Nicholson’s despondent paean The Seabird’s Cry takes place not by the ocean but in the home counties: he walks with a South African friend through a peaceful landscape, one he always took to be the distilled essence of English nature. He turns to his friend and asks what she thinks. It’s so quiet, she says, it’s so dead. Where are all the animals?

Phenomenon like this — depopulation, extinction, shifting baselines, artificial wildness — and what we should do about them, are the main concerns of Ben A Minteer’s pithy introduction to modern conservation ethics. His sights are set not on the possibility that we might techno-fix our way out of cataclysmic environmental degradation, but on the question of whether we should.

Through a series of linked though self-contained essays, he tackles a range of contemporary conservation dilemmas, taking in turn de-extinction, voucher specimens, assisted colonisation, geo-engineering, and the modern zoo.

He treats each of his subjects with a calm disinterestedness, with nods to older conservational traditions, and at first this works as a pleasant alternative to the histrionic nihilism, heartache and guilt that ordinarily pulses through writing on these topics. But this appearance of maturity soon gives way to a feeling of myopia, Minteer providing us with no clear historical or sociological context in which to understand extinction, and by the end of the book his approach (conservatism dressed up as pragmatism) begins to look a lot like a lack of ideas.