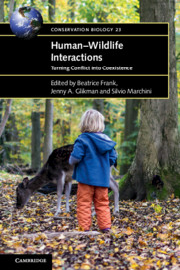 As human habitation has spread around the globe, our cities have sprawled ever outwards into what was once natural habitat or even wilderness. We have displaced other animal species from their own habitats, changing their ecosystems and necessarily their hunting or other feeding behaviours and strategies. This has brought humans into conflict with animals in many cases. Some case studies from around the World are featured in this book.

This is an open-minded book that seeks to examine the many facets of each case study exploring the human dimensions and ecology alongside that of the animals featured in each case study. The authors collectively have expertise in ecology and in the social sciences. Social science methodology has been used to try to quantify the human elements of each example. In many cases it seems that what at first sight is a human-wildlife conflict situation is in fact a human-human conflict; where the animals are a proxy for the interests of a human community or group.

Not all examples in the case studies given are straightforward conflict situations, one chapter for example highlights the lasting and positive relationship between humans and a released and now settled rhesus macaque population in the Silver Springs State Park, Ocala, Florida. The population was released sometime in the 1930s and has been popular with many human visitors ever since.