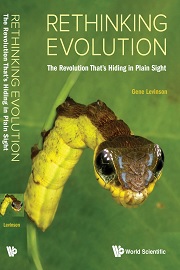 Since the theory of evolution was presented by Charles Darwin and Alfred Russel Wallace in the 1850s it has been a contentious subject. Debates range from the opposed theories of evolution through natural selection and creationism to questions surrounding the role of neutral versus adaptive mutations.

Currently, advances in understanding genes and their DNA/RNA have added a new dimension to the discourse and have highlighted possibilities for direct genetic manipulation. There are parallels here between possibilism and determinism. Such research also reflects the shift in emphasis from studies of the whole organism to the cellular (DNA) content. Rethinking Evolution addresses these principles and developments to provide an up-to-date synopsis of past and current science.

Part one comprises six chapters and focuses on ‘updated evolutionary synthesis’ – that is, what new knowledge has added to the issue of which changes in DNA generate morphological diversity and how life originated. Levinson favours undersea alkaline hydrothermal vents over the more familiar ‘microbial soup’ hypothesis.

Part two comprises 11 chapters, each dealing with developments in genetic science. Examples include the theory of natural selection, Mendelian genetics and molecular genetics showing how complex organisms can arise from simple beginnings. Levinson introduces the new concept of emergent evolutionary potential to show how symbiosis and gene duplication may drive these processes.

The useful 112-page glossary defines myriad terms and gives internet references. Such a synthesis is timely and enlightening especially because of the application of gene-editing using CRISPR. This can be used to alter gene sequences for a range of purposes; already modified crops are imminent. Future prospects are both welcome and worrying.