Energy the Great Driver: Seven Revolutions and the Challenges of Climate Change 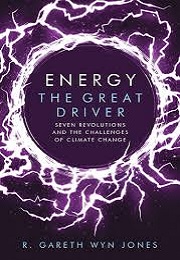 There have been many books on climate change, which outline the nature of the issues which humankind faces in the next few decades. Most of them do not offer comprehensive solutions to the way forward and generally paint a pessimistic picture of the likely future faced by people. Professor Wyn Jones is no exception. However, his wide ranging and novel approach provides a great deal of cause for thought, and some reasons to consider that people may yet survive to a favourable future.

He starts from the hypothesis that energy enables work and power, which leads to ordered complexity. This is set in the context of the development of life on earth. Unless there are some specific stabilising mechanisms, organisms, and communities of organisms, would be short lived. This leads to the conclusion that at all stages of evolution there must be a state of homeostasis for individuals, simple and complex, and for communities of organisms.

This raises the question as to whether this complex situation has gone so far that it is out of human and biological control. Homeostasis will fail to exist, and some dire consequences may befall humanity. Professor Wyn Jones offers one outcome with a favourable future for man on earth but one senses that he is not optimistic that it will be fulfilled without a major change in people’s appreciation of the problems to be faced.

The book has some useful notes, a strong list of references and an index. It would be valuable as a basis for seminars to senior students in school and university across a range of subjects, albeit a sound understanding of some basic physics would be desirable.