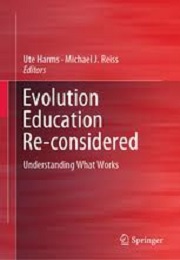 "Nothing in Biology Makes Sense Except in the Light of Evolution"

Dobzhansky’s profound statement underpins this multi-author volume, which is more like an extended scientific journal than a coffee table book. I was especially struck by the powerful arguments from the editors as to why everyone needs to understand evolution as a fact, not just biologists.

The book comprises 16 scientific reports on what works in teaching evolution. Many obstacles to understanding are considered. Among these, religious belief is prominent, but cultural factors are also powerful. Nevertheless the latter can sometimes be exploited. A strong message is that going head to head against entrenched beliefs can be counter-productive.

As an outsider to educational science, I found the study designs interesting. Participants in some studies were of course students (e.g. measuring how their understanding responded to teaching), and in others the teachers. I am not qualified to comment on the statistics, suffice it to say that the reports contain copious data and extensive analysis. There is a history of bad decisions in education policy, often because they were not evidence based, and here we have examples of much more rigorous approaches.

This is not bedtime reading. It requires concentration, and most authors do not have an especially engaging style. I found it quite hard work. Again, I was irritated by the author and date reference format, which breaks up the flow of the text, sometimes with two or more lines of references. I much prefer Vancouver style.