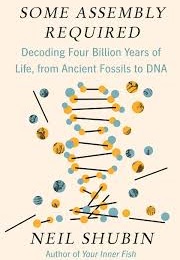 In Your Inner Fish Neil Shubin described how much of the human body reflects its deep evolutionary past. Now, in Some Assembly Required, Shubin expands upon this using both recent research and older examples to illustrate the central theme of his book: ‘Nothing ever begins when you think it does.’ As examples, while you might assume that legs and lungs first appeared during the transition from water to land, or that feathers developed to aid flight, their origins lie far earlier.

One of the early popular criticisms of The Origin of Species was that Darwin hadn’t explained the gradual development of features that wouldn’t provide any benefit until substantially formed – what Stephen Jay Gould described as the ‘2% of a wing problem’. Darwin addressed the criticism in the sixth edition of Origin with the observation that new features often developed ‘by a change of function’. This powerful insight underpins much of Shubin’s book as he uses ‘Darwin’s five words’ to explain how ‘new’ adaptations or genes are usually repurposed modifications of pre-existing forms. His range of examples is astonishing: proteins that bind cells together in multicellular organisms were also present in our single-celled ancestors; a protein necessary for the formation of mammalian placenta was co-opted from an ancient viral invader.

Shubin uses evidence from fossils, embryology and DNA sequencing to explain many of the major transitions in evolution – as a practising researcher in palaeontology and developmental biology, and a gifted writer, he does this with great clarity and enthusiasm. Along the way he also reveals the stories of the scientists behind the discoveries. Whether they are scientists that Shubin has encountered personally or not, there are human tales of them all – some a little sad, but all ultimately inspiring.