A History of Plants in 50 Fossils 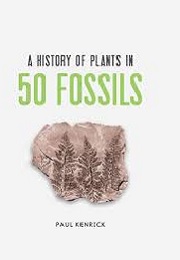 The Natural History Museum, London, is known for publishing excellent books and ‘A History of Plants in 50 Fossils’ is another tour de force to add to its catalogue. Telling the story of plant life on Earth through a ‘remarkable record of spectacular fossils’, Paul Kenrick, a research scientist at the NHM and author of other books on plant evolution, has put together an extremely readable and well-illustrated book that is pretty enough to be a ‘coffee table’ book but also sufficiently informative to be an academic text.

The importance of each fossil in the evolution of plants is explained, with most given a double page spread; one side has an often striking picture of the fossil and opposite it, detailed historic and scientific information that may include a story about the specific fossil. Useful background about ecosystems and habitats during the matching geological periods is provided throughout. Further notes about each specimen are given in the appendix.

Arranged roughly in chronological order and starting with the origins of plant life in the sea and the evolution of photosynthesis around 2.6 billion years ago, the plant timeline is illustrated with fossils of algae, then the first land plants, followed by ferns, the first trees and finally flowering plants.

Some of the fossils illustrated are almost whole plants, such as the 5ft high giant club moss from a Welsh coal bed, weighing over a ton; others are tiny plant parts including pollen and leaves or even a few cells, like the 1.2 billion year old tip of a red alga from the Canadian Arctic. Interesting comparisons can be made where some fossil photos are paired with pictures of modern relatives.

Palaeontologists, botanists, taxonomists, fossil enthusiasts and anyone interested in plants and evolution are likely to find much to enjoy and inform in this book.