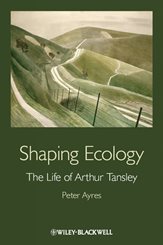 Walk through the ancient yew woodland of Kingley Vale nature reserve in West Sussex on to Box Hill, and you will come across a monument to a remarkable botanist and ecologist: Sir Arthur George Tansley (pictured in the portrait above).

Designated in 1952 as one of the first official 'places for nature' by a fledgling Nature Conservancy (which Tansley chaired), the reserve exists because of his personal lobbying. No mere academic scientist, Tansley was at times breathless in his ability to embrace plant geography, ecology, psychology, philosophy, biology, politics and conservation. He recognised, ahead of his time, the complex and changing relationships between nature and people.

This elegantly crafted biography by a Tansley enthusiast and former executive editor of the New Phytologist (a journal that Tansley launched in 1902 and edited until 1931) is a mixture of scientific insights, archive research and oral interviews with family members and former students. So important was the need for such a reflective biography, the research was co-funded by the New Phytologist Trust and the British Ecological Society.

As the Tansley Stone at Kingley Vale proclaims, he "during a long lifetime, strove with success to widen the knowledge, to deepen the love and to safeguard the heritage of nature in the British Isles".

To all of us who cherish such wild places in modern Britain, as this book reveals, we owe Tansley a great debt.