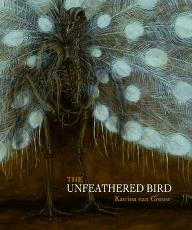 The sheer mass of this book suggests a quality document and one is certainly not disappointed. Sepia-coloured drawings on satin-finished cream paper show that this is a labour of love.

Author Katrina van Grouw is a former curator of the ornithological collections at the Natural History Museum and a former student of the Royal College of Art. It was her lifetime ambition to produce a book on bird anatomy that bridges the disciplines of art, science and history. The book was 25 years in the making, with all 385 drawings from actual specimens. Van Grouw is also a skilled taxidermist.

The Unfeathered Bird was originally intended as a book for artists, perhaps those with a leaning towards scientific illustration. However, with the inclusion of sound biological information, the book has much wider appeal and would be attractive to the general reader and those with an ornithological background.

Nothing below the bird's skeleton is included in the artwork, but it does include some muscle systems and occasionally unique structures associated with some birds, such as the coiled windpipe of the trumpet manucode. I cannot help but draw some comparison with Leonardo da Vinci when it comes to van Grouw's amazing observational skills.

After an introduction there is a brief note on avian taxonomy followed by part one, which deals with the anatomy of the bird's body, considering separately the trunk, head and neck, hind limbs, wings and tail. This generic section examines design associated with function such as structural adaptations to flight.

Part two deals with six orders of birds: the Acciptres, Picae, Anseres, Grallae, Gallinae and Passeres. There is a short, dictionary-style paragraph devoted to 'defining' the order at the start of each chapter before detailed drawings of representative species begin to adorn the pages.

This is a fascinating book that is written and prepared by an exceptional observer, who possesses a thorough understanding of the subject material.