Domestication of Plants in the Old World 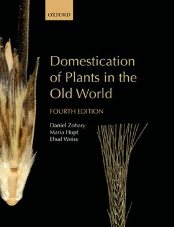 Our epic human story would be incomplete without the subject of this book: domesticated plants changed the world. Botany, plant conservation, agriculture, archaeology and the ancient history of western civilisation all meet in this invaluable book.

In this fourth edition the authors update the classical taxonomic evolutionary evidence by including the latest genetic techniques to further elucidate the history of our crops. The bulk of the book gives a systematic treatment to 12 cereal species, 10 pulses, seven oil and fibre crops, 18 species of fruits and nuts, 15 vegetables and tubers, four condiments and five dye crops.

Some evidence has changed – DNA now shows that barley, whose classic wild distribution arcs through the Fertile Crescent, had two separate centres of origin – one in the Jordan Valley and a second on the Iranian plateau. A large chronological chart shows how crops and cultures have moved from the Proto-Neolithic in south-west Asia north into Europe.

This is a hugely important perspective for our own society and culture. With its defined geography, the scope of this book is of course challenged by the plants that have migrated in from outside. Of all the citrus fruits, the citron alone was known to ancient Greece; while only after the expansion of Islam intoAsia did all seven citrus fruits come west.

In total, 24 pages are given to a gazetteer of archaeological sites and 35 pages to full references. Where is the comparable volume for the story in the Indian subcontinent and China?