Air: The Restless Shaper of the World 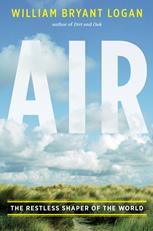 William Bryant Logan is already the author of two other successful books in this trilogy about the elements. Dirt was made into an award-winning documentary film, and Air is set to go the same way.

From the title alone I presumed that this would be a book about monstrous twisters or the woes of climate change. I was pleasantly surprised and drawn into the eloquently described and fascinating world of airborne biota in the first few chapters. The second section does relate to climate and weather, but from several different perspectives: the history of meteorology, Darwinian dust collections, Grecian gods and classical artworks, to mention just a few.

Of specific interest to biologists or anyone with a passion for natural history are the sections devoted to microorganisms, fungal spores and pollen or the travelogues of various fauna that weave kites for paragliding expeditions, like some spiders. Amusing and fascinating anecdotes – like Japanese honeybees cooking hornets – keep the reader turning pages. The use of lots of statistics in imperial units makes it less easy for average readers outside the US to grasp the significance of certain values. Also, although the dust pollution following 9/11 is discussed in some detail, there is no reference to radioactivity as an airborne peril despite the recent disaster at Fukushima. Similarly, a reference to Eyjafjallajökull by the author (who is studying for his pilot's licence) could further enrich this anthology.

Air is a diffuse collection of colourfully narrated stories. With smatterings of the author's philosophy it is an easily digestible yet rich feast that would go down well as a gift at any time of the year.