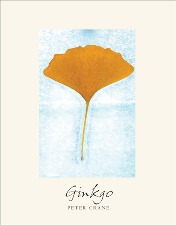 Since studying botany and zoology as an undergraduate, so-called 'living fossils' have always held a fascination for me. These include ginkgo biloba, the oldest living tree. Without human intervention resulting in its worldwide dispersal, we would only have known it from its fossil remains.

Peter Crane guides us through every aspect of the tree's provenance, at the same time using it to weave an enthralling tale of people, history, evolution and conservation. He leaves no stone unturned in his quest to present the story of this remarkable tree.

He uses the ginkgo as an example to illustrate how other plants, such as the wollemi pine, have been saved from extinction. He also issues a warning about the politicising of the Convention on Biological Diversity.

Those who read this book are likely to look upon the ginkgo with a sense of enchantment, as do I from the kitchen window, to where one has grown in my garden for the past 30 years. If you are not lucky enough to own one, go to see the Old Lion ginkgo at Kew, and marvel.