The Olympic Games and the Environment 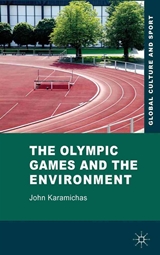 Since their revival in 1870, the Olympic Games have created as many myths as the events themselves. One is that Hitler invented the torch – he didn't, it was introduced in the 1828 Amsterdam Games. Another is that present day Olympic thinking is environmentally sensitive.

Since the 2000 Games in Sydney, there has been a trend towards promoting the greening of the Olympics. Has it worked? Can it work? Professor Karamichas sets out to tell us in this slim, expensive book.

'Environmental modernisation' (EM) is now a recognised aim of the Games. The Sydney Olympics were followed in 2004 by Athens, which produced a similarly green agenda but "failed miserably" to put it into practice, according to Karamichas.

Objective indicators can be used to quantify the environmental impact of an Olympics – levels of CO2 emissions and the fate of sites designated for environmental protection, for example – and the results do little to encourage anyone to have faith in the future. Green credentials are a hallmark of a successful application by a host nation but, as this book shows, they may never be translated into reality once the Games are finished.