What is Life? How Chemistry Becomes Biology 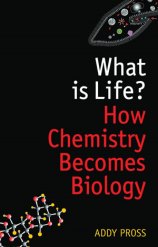 In 1944, physicist Erwin Schrödinger wrote What is Life? a book that inspired Francis Crick to embark on his Nobel prize-winning research on DNA.

But Schrödinger's challenging question, 'how can the events of space and time that take place within the spatial boundary of a living organism be accounted for by physics and chemistry?', has eluded a satisfactory answer. Although virtually all biologists accept that life emerged from non-living matter by processes ultimately explicable in terms of physics and chemistry, the nature of the transformation remains obscure.

In this inspiring book, Pross provides an engaging account of the view that systems chemistry can bridge the hitherto unassailable abiogenic/biogenic divide. In a carefully constructed, almost forensic, analysis, he confronts crucial issues, such as the conceptual gulf between the biochemist's chicken and egg problem: i.e. whether replication precedes or follows metabolism (where he argues persuasively for the former) and the fundamental role of dynamic kinetic stability in the process of life.

In the two concluding chapters he propounds, in almost lyrical terms, the theory that the causal sequence 'replication, mutation, complexification, selection, evolution' is not the preserve of living organisms but also evident in purely chemical systems – providing the credible link between chemistry and biology.
The book is not without weaknesses, however. Notably, by assuming that the scientific method is nothing but 'inductivism' (thus ignoring Popperian 'falsifiability' criteria) – he too readily dismisses 'emergence' in favour of 'reductionism'.