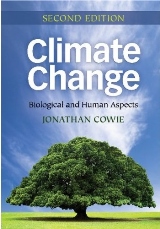 Literature on climate change and its impact has burgeoned in the last few years as what was once a possibility becomes a reality. Approximately half the book is therefore concerned with the record of climate change.

Topics include methods of climate reconstruction, such as dendrochronology, pollen analysis, oxygen and other isotopes, and their interpretation, plus the proxy record of climatic change through 5 billion years of geological time including a relatively detailed documentation of Holocene change.

Additional chapters examine recent and future climatic change; the emphasis is on how climate has influenced biological change since the Little Ice Age (c.1600); the record of greenhouse gas accumulation in the atmosphere pre- and post-accelerated fossil fuel use; and the influence of climate change on human activity.

The evidence for current warming and its impact on biological/ecological systems is also examined, along with possible future effects including the identification of all-important thresholds.

How human impact has caused climate change and how this is affecting society are also debated, with sections on population, energy, health, food security and ecological mechanisms for mitigating climate change. Some 70 pages are given to the political dimensions of climate change, which have mostly emerged since the 1970s. Challenges include sustainable development, appropriate energies of the future, and adaptation to a warmer world with an increasing population.

This is not a ground breaking book, but it is a useful synthesis of recent literature for undergraduates.