Oxytocin, Vasopressin and Related Peptides in the Regulation of Behaviour 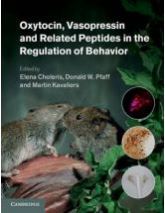 In 2005 Nature published a paper that was scarcely believable. The paper reported on experiments using a trust game in which two people were involved in money transfers. Each person was given a certain amount of money and the first one was asked to send some of it to the second. The experimenters then tripled this transferred amount for the second player, who could then choose to send some of it back to the first player. A surprising finding was that a dose of oxytocin given intranasally more than doubled the number of people who sent all their money to the second, who were under no obligation to send any of it back.

Here we see a remarkable demonstration of the impact of a simple chemical on a complex human behaviour. The book provides upper-level undergraduates and beginning graduates with a wide-ranging review of the background material needed to understand the functions of oxytocin and related peptides. The clearly written and well-referenced chapters deal with molecular mechanisms, phylogenetic considerations and clinical applications, as well as effects on human behaviour, and the final chapter suggests potential lines of future research. A well-organised and presented book on a splendidly interesting subject.