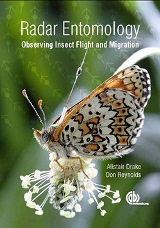 It is incredible to think that radar technology, developed to detect planes and ships, has contributed to our understanding of insects as small as aphids. This book contains both detailed information about radar systems used in entomology, and the advances in knowledge they have brought about.

Early chapters explain radar principles in great detail – the physics and engineering of the different designs – but you don't need to understand the technical details of radars to find this book valuable.

It provides an extensive review of insect pest movements and forecasting. For example, before radar studies, the role that migration played in outbreaks of the African armyworm caterpillar was unknown. Radar observations revealed that the moths fly hundreds of metres above the ground, which affects their flight speed and direction, and that their migration strategy includes deposition during rain. This led the way for predictions based on satellite maps of cloud cover.

Much of Radar Entomology is dedicated to migration, but other flight behaviours are also recorded. The mating flight of the honeybee, for example, normally takes place too high for humans to see (although it can often be heard). Radar observations revealed the drones' remarkable ability to detect queen pheromone – they move towards a queen from up to 240 metres downwind.
In conclusion, this thorough review of the contributions of radar entomology to our understanding of insect behaviour and ecology is to be recommended.