Penguins: Their World, Their Ways 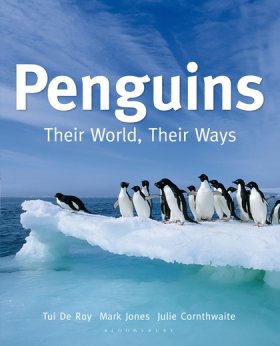 This substantial and comprehensive volume is based on the 18 species of penguins found worldwide. With more than 400 high quality photographs and up-to-date scientific research, this is an impressive work with high visual impact. Tui De Roy and his co-authors have harvested a wealth of material over 15 years, the majority written and photographed from personal encounters with penguins in their natural habitats in the southern hemisphere.

Penguins is divided into three sections. The first categorises the 18 species into six groups, the Jackass, True Antarctic, Rockhoppers, Crested, White Flippered and Yellow Eyed, and the King and Emperor penguins. De Roy details their distribution, behaviour, diet, feeding and life cycles with stories based on his real life experiences.

Co-author Jones introduces section two, 'Science and Conservation', and discusses 'Penguins and People'. He tells the story of the King penguin at Edinburgh Zoo who was knighted by the King of Norway.

Original and current work from 16 scientists is presented with a double page for each contributor to explain their studies and conclusions. It includes research into evolution, climate change, pigmentation and monitoring. Section three discusses all 18 species and gives details of their physical features, population and distribution, breeding, food and principal threats, as well as some 'fascinating facts' such as which species is the fastest swimmer and how penguins remove excess salt from their bodies.

This book enables you to consider more scientific aspects of the world of penguins and it would be attractive to readers of all ages.