The Climate Casino: Risk, Uncertainty and Economics for a Warming World 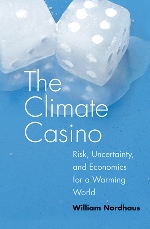 The scientific community may have reached a consensus regarding the probable causes of recent and apparently ongoing climate change. However, the extent of the impacts, the rate of change and how to reduce both are still very much in debate.

For many biologists, who are less familiar with the economic mechanisms that will be drawn into play, this book provides a comprehensive overview from the perspective of a well-versed macroeconomist. The hard fact facing environmental strategists is that the global economy is currently dependent on energy sourced on fossil fuels and that this is not going to change overnight. As such, it is paramount that all scientists working to alleviate climate change have some degree of understanding of the economic forces at work.

The idealism of many well-intentioned strategies or international agreements, such as the Kyoto Protocol, are exposed, with positive suggestions for alternative schemes that potentially would receive greater widespread approval and compliance.

The book is written in five sections, the last three outlining strategies, policies, institutions and politics involved in addressing climate change. The second section is more familiar territory for biologists, as it deals with the impact of climate change on agriculture, human health, biodiversity and the oceans.

From a biologist's point of view, it could be argued that Nordhaus does not stress the complete dependence of society upon our ecosystems enough. It is not that some ecosystem services are underplayed, but rather that the extent and critical importance of these is not fully emphasised.

The economic focus of this book should provide a valuable insight into the challenges and barriers that must be overcome for planners and policy makers. Environmental workers will benefit from incorporating these factors into their considerations, as to omit them would be as myopic as economists of bygone days ignoring environmental externalities. That does not seem worth the gamble.