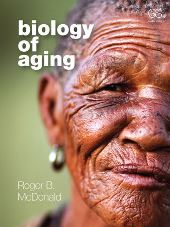 Sir Peter Medawar wrote in 1952 that "biological ageing was one of the great unsolved mysteries of the time and it would take another 40 years for this baffling mystery to be solved". Of course, in the intervening years, new research in genetics and cell biology has provided answers to some of the problems. There are a number of Schools of Gerontology in America and Professor McDonald is in one such department, which was founded in 1967.

This book is supposedly a textbook on gerontology for undergraduates, and while it has useful reading on development and senescence in plants and various animal species, and general information on cell ageing and mutation, about half of the book concentrates on human ageing.

There is information on the normal changes in the senses and the body systems, and it covers age-related diseases such as those of the endocrine and cardiovascular systems, as well as Parkinson's and Alzheimer's.

It is an interesting book to dip into, but it is difficult to see it as an undergraduate textbook except in those universities with courses in biogerontology.