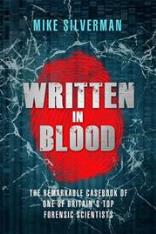 Mike Silverman and Tony Thompson
Bantam Press, £18.99
Despite the occasionally rather graphic description of the subject matter, I thoroughly enjoyed this book. While shining a spotlight on the disturbing things that humans are capable of doing to each other, the descriptions of the scientific evidence needed to stop them make fascinating reading.
The story starts in the 1970s, a time when techniques such as DNA fingerprinting did not exist. I particularly liked the progression of the story with Silverman's career and all the changes that he saw over the years. The feeling of slight helplessness as he ends up doing ever more admin and less and less science as he moves up the career ladder will also be familiar to many.
Many of the cases described will be familiar to some readers – for example, the murder of Damilola Taylor. If you were shaken by the case at the time, prepare to be shocked again as Silverman reveals what went on behind the scenes and demonstrates that scientists, even forensic scientists, are only human.
As the book progresses, you are treated to a detailed insider's view of the politics and interactions between the Forensic Science Service (FSS) and commercial forensic science providers, which led to the end of the Home Office controlled FSS in the UK, the full ramifications of which are yet to become apparent.
If you like science, forensics, modern history and politics, or just a good read, you will enjoy this book.