Ignorance: How it Drives Science 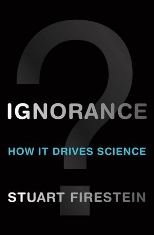 This is a lovely little book, which is truly about what drives science; and it’s not about physics, or chemistry, or engineering, but real biology. Mostly neurobiology, but that’s okay.

“We have too many answers, not enough questions,” author Stuart Firestein writes early on. In my formulation we have too much ‘information’ from the internet, not enough ‘knowledge’.

Firestein wants everyone to understand what is going on. We don’t all have to understand the physics of the Big Bang, but he does want us to follow him through several investigations of “the thing you think you think with”, starting with the ‘Clever Hans’ problem – when a horse appeared to be able to do arithmetic, but was actually ‘reading’ the people presenting the problems.

He includes fascinating work with dolphins by Diana Reiss, and with Alex the parrot by Irene Pepperberg, where the animals were not simply puppets, but encouraged to show their ‘minds’. I would have liked more details of Pepperberg’s clever technique, but the description is adequate, and he does refer to the book Alex and Me.

The big problem, for me, is a formal one. In the title, ‘Ignorance’ isn’t a something, it’s an absence, like darkness, cold or a vacuum; the technical term is a privative. So there isn’t an ‘it’ to drive anything. However, this is a great little book, despite that formal plaint. Give it to your friends or relatives to explain why you do science.