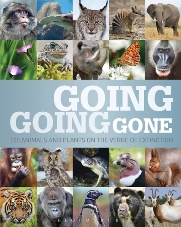 The subtitle – 100 Animals and Plants on the Verge of Extinction – indicates that this is a guide to some of the most threatened species and habitats. Initially the most notable feature is the collection of 100 superb full page photographs. However, of great interest is the method of production of this book – 100 conservation organisations were invited to nominate one plant, animal or environment that most needed to be protected and explain how people can assist in their efforts. The organisations range from huge international groups, such as the WWF and the RSPB, to much smaller groups, such as the Lemur Conservation Foundation.

Some of the endangered species are well known, such as the common hippopotamus (150,000 individuals left), orangutan (60,000) and African elephant (550,000). Others are less obvious, such as the mangrove finch (nominated by the Charles Darwin Foundation), which are reduced to about 100 individuals and are at extreme risk of extinction.

For each species there are notes on their status (endangered, vulnerable, threatened), population, lifespan, range and threats. At the end of each page is information on what you can do – this directs the reader to further online information and also to membership of the relevant conservation organisation.