One small step for a physiologist

Jessica Meir has always been adventurous, even before she applied to be an astronaut. A keen scuba diver with a private pilot's licence, she had taken a number of space science courses and her research had taken her to a range of extreme environments, including below the Antarctic ice.

In June 2013, Meir beat a record 6,372 applicants to become one of the eight members of NASA's Astronaut Group 21. The class will join 47 other active NASA astronauts and visit the International Space Station, orbiting 250 miles above the Earth at an average speed of around 17,000mph. One of NASA's longer term goals is to send a crew to a near-Earth asteroid by 2020 in preparation for an eventual trip to Mars.

In first grade at school I drew a picture of an astronaut when I was asked to draw what I wanted to be when I grew up. But my favourite subject as a kid was always biology. Some people think of that as odd and not the straightest path towards being an astronaut compared with, say, being an engineer. But biology was always my passion.

How did you move from physiology research to becoming an astronaut candidate?

I was on NASA research programmes while at university, then I went to the International Space University for a year, which was perfect – very interdisciplinary, with aspects of space biology and space medicine, but policy and mechanics, too. I am incredibly fortunate that I found a career that was really fulfilling before becoming an astronaut. My work at the Scripps Institution of Oceanography blended all the things I like – elements of exploration in the Antarctic while studying hard-core physiology of animals in extreme environments. I was equally happy doing that as I am being an astronaut.

What does the application process involve?

There are two paths to becoming an astronaut: military and civilian. Civilian positions are advertised just like all federal positions, on the USAJOBS website. So you just send a CV and some information you hope will catch their eye. The most highly qualified are selected and assessed and, from these people, 120 go for two days of interviews and do basic physical and medical tests. Then around 40 to 50 candidates are selected for the final round, which involves a whole week of medical testing: brain MRIs, a full body scan, colonoscopy, cardiac calcium tests. You need to be in really good medical shape with no underlying conditions.

It's kind of the opposite of an academic interview – it was my scuba diving and private pilot skills I had to push at them. They didn't really care what journals I was published in: they could see I was doing well in what I studied and were more concerned with my operational abilities. I will not be up in space as a scientist – I'll be an operator of someone else's experiment and other equipment.

Tell us more about what you will be expected to do when you go to space – are you there solely to conduct life science research?

In the Shuttle era, you would have 'mission special' astronauts with specific skills, but now we are all trained the same – to be generalists. I work alongside a jet pilot and we do the same training. Right now, we are training for a mission to the International Space Station (ISS).

Do you think about going to Mars?

Currently, I'm focused on the ISS, since that is the mission that we are supporting right now. Of course I think about the longer term goals of exploring beyond low earth orbit, perhaps returning to the Moon or going to Mars. Would I go? Would I be scared? There are private entities that say they are planning a one way trip. I would definitely be interested in contributing to these missions once NASA has worked out the details of getting us to and back from Mars.

One of NASA's long-term goals is to send a crew on a mission to a near-Earth asteroid by 2020 in preparation for an eventual trip to Mars. How likely are you to be on such a mission?

Currently, astronauts' career spans are decided by the radiation dose they have receive. It can differ depending on the solar cycle and the altitude of the space station during their mission. But there are many who have done more than one mission. In the Shuttle era, people would fly three or four missions, but now only a few Americans going into space every year. Some astronauts go on to work for private space companies such as Virgin.

While President Bush was in power, the objective was to go to the moon, but Obama changed that. It is now to land on an asteroid and try to change its course, or bring a section of it into orbit around the moon and explore it there – all to help us to prevent a future mass extinction event.

What did you study when you were a physiologist?

I studied the diving physiology of mammals and birds – specifically emperor penguins and elephant seals. We used backpack recorders to monitor their heart rate and depth, and what was really successful was this oxygen electrode that gave us measurements from arteries and veins while they were diving in the wild, which we could correlate with diving behaviour. What was interesting was how far they could push it – how low their heart rate went, what low levels of oxygen they could tolerate.

It involved diving beneath frozen ice, or watching the animals from an observation tube cut into the ice and hanging in the water - even then you still have to dive out to clean the windows. So it gave me both a mental and physical challenge, which is what I always look for.

For my postdoctoral research, I looked at barheaded geese – again studying hypoxia, but this time due to the altitude that they fly at as they migrate over the Himalayas. My work involved hatching them and raising them so they were comfortable enough with me to train them to fly in a wind tunnel in masks, where I could measure their heart rate and breathing, but also change their inspired air, lowering the amount of oxygen to stimulate hypoxia as if they were at altitude. 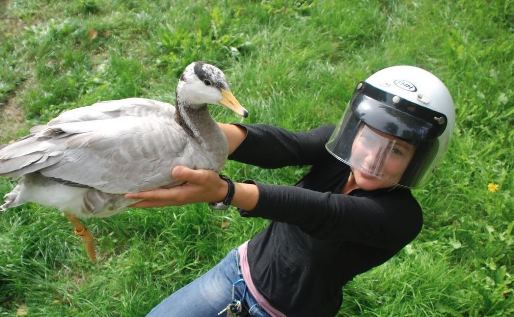 Is much of NASA's physiology research about the effects of space on the body?

Yes, physiology research is a large part of our research program on the ISS. With the knowledge that we have gained and the exercise program we have implemented in space, we now have countermeasures so effective that some astronauts return to Earth with stronger muscles than when they left. We have a broad research program on the ISS encompassing a diverse range of sciences, ranging from microbiology to materials science and fluid processes.

You've trained as an aquanaut, as well as an astronaut. What missions have you done underwater?

That is something I did while working at NASA before I trained to become an astronaut. It's an underwater habitat 45 feet down [a few miles off Key Largo, Florida], which is great for coral reef researchers and is used by a lot of marine biologists. NASA got interested in using it as an analogue for space, as it has the small space, small crew, life support systems and all the other psychological aspects and crew dynamics of a space module. We were collecting data for coral research, but also building structures as if we were on a space walk. I went down there for 10 days, but my mission was cut short, as we had tropical storms.

What does an average day involve for you now?

It's completely different to academia, where you have incredibly detailed knowledge about one highly specific area. Here, you have to compartmentalise lots of different skills in different parts of your brain. In research you work out your own system and plan your own schedule. Now I wake up and my day has been planned for me. After this conversation, I'm having a Russian lesson. Then tomorrow I'll be at Mission Control. Then the next day I might be flying a T-38 [a supersonic military jet].

What's been the best experience you've had since joining NASA?

The training has been phenomenal – these are things I'd normally pay a lot of money for! Now I get to do them all the time. You do two years of astronaut training, and to graduate you have to be proficient in a variety of areas. You must complete a space walk in a mock-up of the ISS in a pool. Although I had my pilot's licence, I had never done any military style flying and had to learn to fly a T-38. Then there was a big backpacking trip, robotic arm training, and trips to Japan and Cologne to be trained in their ISS modules. We also do Russian language training, as all members of the ISS speak either English or Russian.

Do you think there is life on Mars?

I think the chances are getting better all the time, especially after the huge announcement in 2015 that there may have been extensive amounts of water there throughout the planet's history. I've always believed there is other life out there – of course there is: it would be egotistical to think anything else. But perhaps given the scale of the universe and the timescales involved we will never have that knowledge.

Jessica Meir was an assistant professor of anaesthesia at Harvard Medical School, following postdoctoral research in comparative physiology at the University of British Columbia. She is one of the eight members of NASA Astronaut Group 21.