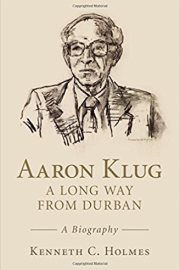 If something happened in molecular biology in the second half of the 20th century, Aaron Klug was there. He was there among the genetic pioneers of the 1950s and he was still there when research began on the mapping of the human genome.

Such tremendous staying power means his life is a fascinating reservoir from which we can draw scientific and social insight, and we follow him in this work from humble beginnings as the son of Jewish émigrés from Lithuania, shunning cricket for books at his colonial school, to his eventual instalment as the self-effacing but ever-present old man of molecular biology, a director of the Laboratory of Molecular Biology, president of the Royal Society and holder of the Nobel Prize for Chemistry.

What is more fascinating in the context of this book, however, is how hard it is to get a grip on Klug as a man. It is not that he appears boring, quite the contrary – he drank with Kingsley Amis, grieved deeply at the death of Rosalind Franklin, married a dancer and violently fell out with lifelong friends over Israel – more that the true Klug is hidden between the pages, smothered beneath the minutiae of departmental appointments and conference papers given.

This book is a nice slice of scientific history (including, for a change, actual science) and a fairly comprehensive who's who of post-war British biology, but it is as dry as a bone. Given his achievements, I believe its subject can be forgiven for appearing a man without a voice, suffocated by the copious bureaucratic facts of his own life – the author less so.