The Mosquito: A human history of our deadliest predator 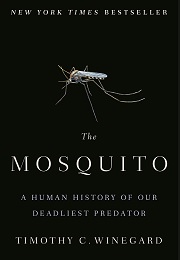 This enjoyable but sprawling book is quick to inform the reader that of the 108 billion humans estimated to have ever lived 52 billion succumbed to a mosquito bite. Strictly speaking, most of those deaths are due not to the mosquito per se but to the malaria parasite carried by just one of many genera. Still, scientific detail and academic pedantry should not get in the way of a compelling narrative. If you can set these principles aside, the text is full of mind-blowing morsels, substantiated or not, to amaze your friends at a post-pandemic pub trivia night. For instance, the mosquito can lay claim to be a staunch ally of papal supremacy in medieval Europe, George Washington’s lethal weapon in the American War of Independence, and, in this century, a driver in the success of the world’s largest coffee shop corporation.

Some may find the writing style irritating – much like a mosquito bite – since it is steeped in hyperbole (the perpetrator is variously called “our apex predator”, “the destroyer of worlds” and “the ultimate agent of historical change”). It is this last label that resonates loudest throughout the text, reflecting the author’s background as a history and political science lecturer. This is the latest in a succession of recent titles that attempt to explain human history through the influence of a single factor. There is no doubt that the mosquito is a major player in shaping society through the ages, to which this is a worthy, if flawed, testament.