Crowdfunding is raising money for a project or venture by attracting relatively small contributions from a large number of people, usually via the internet. Over the last decade, it has become a popular way to raise money for creative, charitable and entrepreneurial projects.

In recent years, the number of successful science-related crowdfunding campaigns has grown, too. In response, several crowdfunding websites have been set up specifically to host and support scientists hoping to raise money in this way. 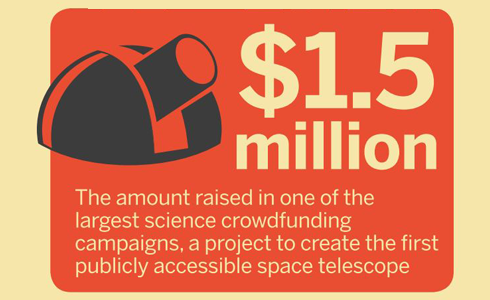 The average amount raised in a successful campaign rarely compares to a research grant, but on several occasions bioscience projects have brought in hundreds of thousands of dollars[1]. Two projects on human gut flora amassed more than $350,000 each in 2013; a project to make automated robots for molecular biology labs raised $126,000 last year, and in 2014 nearly 800 people pledged a total of $121,000 to help researchers create a complete digital simulation of C. elegans.

Crowdfunding is an attractive alternative for research projects that are unlikely to receive a grant from large funding bodies – for example, projects by students and early-career scientists, or those working in countries with extremely limited science funding.

If a project is not deemed appropriate by research councils, but there is a strong desire for it among certain networks or the general public, crowdfunding enables scientists to bypass conventional funding mechanisms and instead ask for many small contributions from people who feel passionately about it.

If a crowdfunding campaign is successful, a project can go from an idea to fully funded far more quickly than it would via the traditional grant application process.

What are the drawbacks?

In most cases, relatively small amounts are raised in comparison with large grants, and there is little data available to help scientists reliably estimate their chances of success[1]. It is also difficult to know how academic institutions and employers rate crowdfunded projects on CVs against those backed by research councils.

There are also big questions regarding the regulation of the research that gets funded – traditionally, research councils have acted as a barrier to the funding of unethical or dangerous research.

Crowdfunding can go wrong, too – plans for a public space telescope known as ARKYD attracted a whopping $1.5 million in donations, but the project had to be wound down a few years later, and refunds had to be issued to tens of thousands of backers. 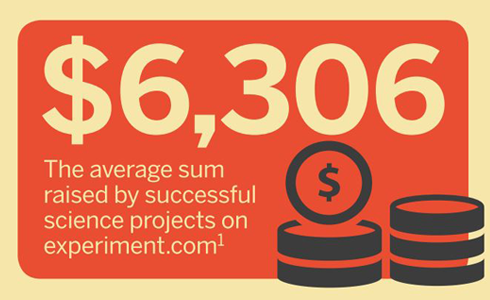 What sort of research gets funded?

Natalie Jonk, founder of crowdfunding platform Crowd.Science, says the organisation is "only at the beginning of understanding the potential of crowdfunding science and the kind of projects that suit it most".

She adds: "So far, we have seen a high success rate in projects looking to raise £2,000 to £3,000. We believe most scientists who are determined enough to raise funds can raise this sum from their own network, including friends and peers.

"The second type of project is one from scientists who have an established network, such as the project we did with Professor David Nutt and Robin Carhart-Harris, who were able to produce groundbreaking images of the brain under the influence of LSD. When we launched this project, lots of people got behind it and helped with the promotion, which helped it raise the funding it needed.

Jonk says crowdfunding can attract the attention of supporting organisations, which may then add a large investment to what has been donated already.

Research councils have processes to ensure only reputable science is funded. Who regulates what gets funded online?

Crowdfunding sites could offer a route for maverick scientists to get unsafe projects funded. But crowdfunding advocates such as Jonk believe it is healthy to fund science projects that aren't necessarily aligned to government or commercial interests. Many platforms look at each project on a case-by-case basis and their staff decide what to approve. Walacea plans to introduce "a light-touch, peer-review system where peers investigate the methodology and funding required before the project is approved for crowdfunding," says Jonk.

In 2013, Kickstarter banned all projects involving genetic modification after a project to create bioluminescent trees amassed nearly $500,000. The project has yet to produce any such plants. 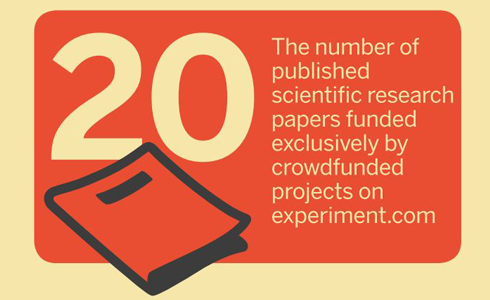 Doesn't crowdfunding favour snazzy, attention-grabbing science over research that is more important but harder to explain?

"Our intention is not to replace the traditional funding avenues, it is to complement them," says Jonk. "If we end up raising millions of pounds for snazzy pitches from scientists doing well-thought-out experiments that interest people, we would be happy about that. Crowdfunding is a new way for scientists to raise funds. Some may find it helpful; others may want to stick to more traditional routes."