A plaque celebrating Dolly the sheep, and the team who created her, was unveiled by the Society of Biology today at The Roslin Institute, University of Edinburgh. 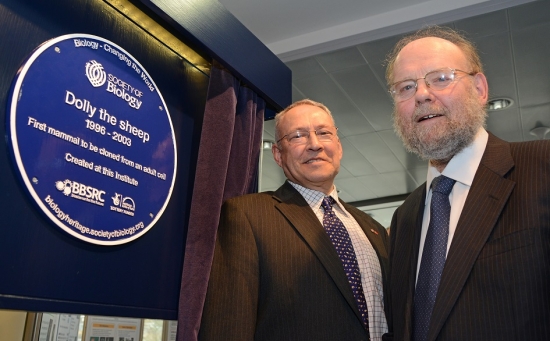 Dolly was the first mammal to be cloned from an adult cell. The Dolly project took place at The Roslin Institute in 1997. The Society of Biology installed the plaque as part of a new series of ten blue plaques around the UK celebrating the eminent but sometimes unsung heroes of biology.

At the unveiling ceremony Sir Ian Wilmut FSB, from The University of Edinburgh, the lead researcher on the Dolly project, (above right) made a speech:
“The birth of Dolly, the first clone of an adult animal, revolutionised our understanding of the mechanisms that regulate development. We used to believe that once a cell had differentiated to a specific tissue type it could not be changed. The birth of Dolly showed that this is not the case. This result stimulated research which is now providing revolutionary opportunities in medicine.”

Dr William Ritchie, from Roslin Embryology Ltd., who worked with Sir Ian on the Dolly project, (above left) also made a speech:
“To make the Dolly experiments successful, many people were involved, from lab technicians to the farm staff caring for the animals to the surgeons and anaesthetists whose skills, successfully transferred the embryos. All the people who gave their skills, effort and dedication to these experiments are immensely proud of the contributions which they made.”

The new series of celebratory plaques include those to: in Suffolk, Dorothy Hodgkin, who discovered the structure of Penicillin; Steptoe, Edwards and Purdy, IVF pioneers, in Oldham; and Richard Owen, who invented the word ‘dinosaur’, in Lancaster.