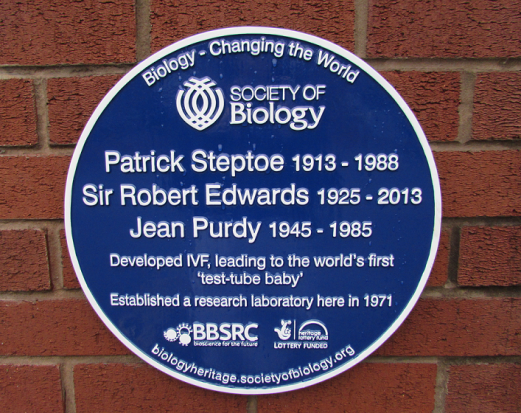 Steptoe, Edwards and Purdy established a research laboratory here in 1971 where they developed in vitro fertilisation technique (IVF) which has led to the births of millions of children worldwide.

The Society of Biology installed the plaque as part of a new series of ten plaques around the UK celebrating the eminent but sometimes unsung heroes of biology.

A statement from Louise Brown, the first ‘test-tube baby’, was read at the plaque unveiling ceremony:
“My mum always spoke with great affection of her visits to the little cottage hospital in Oldham where the biologists did such great work. It was here Jean Purdy first saw cells divide through a microscope – the beginning of my life!

“Sometimes we forget that science is not just about test tubes and chemicals it is about people and the difference that can be made to people’s lives. A few years ago, just before she died, my Mum realised that every blood relative she had in the world – me, my sister Natalie, her grandchildren - had all been due to science and IVF. Without the biologists she would have been alone in the world.”

Professor Andrew Steptoe from University College London, son of Patrick Steptoe, also made a speech:
“I vividly remember coming with my father to Kershaw’s on my visits from Oxford or London, often late in the evening to observe egg implantation or oocyte removal. What struck me was the cheerfulness of the women who underwent these procedures, their utter confidence in Patrick and the scientific team, and the kindness with which they were treated by the nurses and other staff here.

“In vitro fertilization has been an extraordinary achievement from the medical, scientific and societal perspectives. IVF is now a normal process; millions of men, women and children live on our planet as a result of this work, and they are no different from anybody else. What is particularly remarkable is that these achievements were all carried out here, in what was then a small cottage hospital in a medium-sized town in the Northwest of England, with no particular characteristics that marked it out as a place of scientific innovation.”

Steptoe, Edwards and Purdy began working together in the 1960s. Gynaecologist Steptoe used the technique of laparoscopy, on which he had previously published a book, to harvest the eggs of female volunteers, who saw the clinic as their last chance to become pregnant. Reproductive biologist Edwards and his assistant Purdy had developed a technique for fertilising eggs in the laboratory. By retrieving eggs at the right time and fertilising them in the laboratory they thought they could implant them in the uterus and a pregnancy would result.

They began transferring fertilised eggs to the womb in 1971, but it took more than 80 embryo transfers before they achieved their first pregnancy. Lesley Brown, after being unable to conceive naturally for nine years, gave birth to Louise Brown on 25th July 1978.

Michael Meacher, Labour MP for Oldham West and Royton and the Mayor of Oldham, Councillor Fida Hussain also attended this celebration of the local heroes.

The new series of celebratory plaques also includes those to: in Suffolk, Dorothy Hodgkin, who discovered the structure of Penicillin; Richard Owen, who invented the word ‘dinosaur’ and founded the Natural History Museum, in Lancaster; and Dolly the sheep, and the team who created her, in Edinburgh.