Today, over 130 students will receive medals and certificates to recognise their achievements in the British Biology Olympiad and the Biology Challenge at an awards ceremony at the Royal Society, London.

The British Biology Olympiad (BBO) is an annual competition for post-16 students. In addition to encouraging and rewarding pupils in their study of biology, the four winners of the BBO go forward to represent the UK at the International Biology Olympiad, which will be hosted in Switzerland this year.

Building on the success of BBO, the Biology Challenge was developed as a junior version of the British Biology Olympiad (BBO). The Challenge aims to encourage pupils to take an interest in biology beyond the school curriculum and to stimulate their curiosity in the natural world.

Of the 4,200 British teenagers who entered in the British Biology Olympiad, the top 16 went forward to the British final. This comprised a challenging three days at the University of Reading where they took a theory paper and practical exams in botany, cell biology, biochemistry and zoology.

The British competition is organised by a dedicated group of volunteers led by Dr Andrew Treharne FSB, with the support of Dr Amanda Hardy, Schools and Colleges Officer at the Society of Biology. Amanda says: "The standard of the entrants to the British Biology Olympiad was, once again, extremely high. We are very excited to be recognising the achievements of so many students at today's ceremony, and to be sending such a talented team to represent the UK at the International Biology Olympiad in Switzerland."

Both competitions are organised by UK Biology Competitions (UKBC), a Special Interest Group of the Society of Biology. 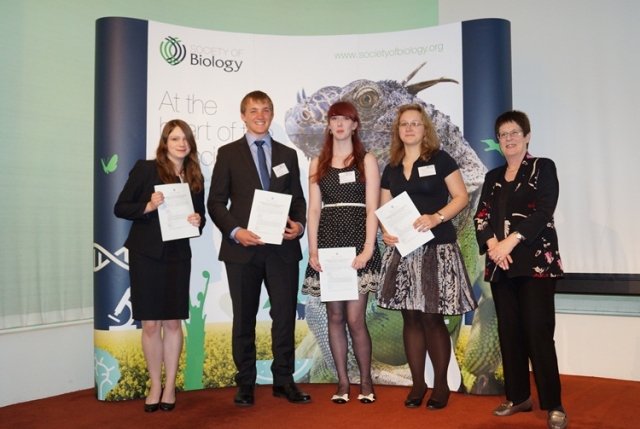