Caught in a trap

It's easy to forget that plants can catch prey too. Dan Rowson looks at the weird and wonderful ways different plants of the genus Nepenthes get their fill

Last year, a new species of carnivorous plant was discovered – not in the humid, verdant depths of a tropical rainforest, but in a glasshouse in London. Disguised under an incorrect label, the plant had been quietly catching cockroaches at Kew Gardens for almost a decade before being uncovered as an entirely new species. Flaunting its new name of Nepenthes zygon, the plant now has its own spotlight within the charismatic and diverse Nepenthes genus. New species of Nepenthes are still being discovered at a surprising rate, but most are severely threatened in the wild as agriculture and mining destroy their natural habitat. 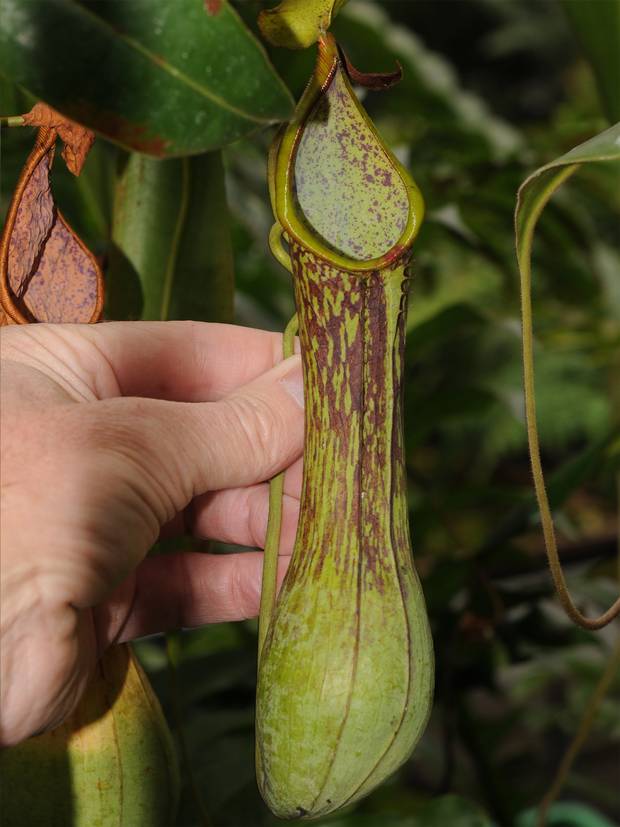 Arguably the most striking of carnivorous plants, Nepenthes are known for their modified hollow leaves,

for which they get their common names: pitcher plants and monkey cups. The fluid lurking inside is a deadly concoction of water, sugars and enzymes that work to trap, drown and digest prey.

Vital yet scarce elements such as nitrogen and phosphorus are released from its unlucky victims and absorbed by the plant. Nepenthes can be found mainly in Southeast Asia, where intense competition for such nutrients has driven a remarkable array of trap adaptations, with diets between species ranging from the gruesome to the truly bizarre.

Nepenthes rafflesiana is an excellent example of the dark and sophisticated deception that this genus employs to lure prey. Like many other Nepenthes species, it produces two types of trap on the same plant: upper pitchers that target flying insects and lower pitchers with more of a taste for crawling insects.

The upper pitchers are narrow and emit large quantities of fragrant compounds, mimicking the scent of flowers. These floral aromas attract a wide range of rainforest pollinators, which mistake the pitcher for a safe source of nectar. Once inside the trap, sticky polysaccharides in the pitcher fluid make wings useless and hinder any insect's attempt to fly to freedom.

In the lower, squat pitchers, the plant invests in a lining of wax crystals. These easily detach and contaminate the 'feet' of insects so they are unable to ascend the pitcher walls. (Imagine trying to rock climb after having your hands and feet dipped in wax.) These lower pitchers almost exclusively trap ants. In having two different carnivorous strategies, the plant cleverly optimises its pitchers to catch organisms from two different ecological niches.

While some Nepenthes have evolved to widen their carnivorous net, other species have become highly specialised. Nepenthes albomarginata has a distinctive band of dense, white hairs just below the rim of its pitchers. This conspicuous feature, made up of the plant's living tissue, is actually bait for termites.

Specialising in such niche prey could prove disastrous if populations were in short supply, but this plant seems to know what it's doing. Termites are arguably the most numerous terrestrial invertebrates found in tropical ecosystems and so provide a reliable supply of nutrients. However, the plant would win no awards for sustainability – its pitchers are 'one use only'. Once the hairs have been stripped, they are no longer attractive to termites. Luckily for the plant, by the time a colony has stumbled on the pitcher and stripped the band clean, its pitchers are full to the brim, having caught around 20 termites per minute during the frenzied feast.

Suitably named, Nepenthes rajah is a king among pitcher plants. Its traps have a capacity of up to 3.5 litres and have been known to contain drowned rats. However, this giant species hasn't evolved its size due to an appetite for rodent flesh – in fact, it's their droppings that the plant seeks. Studies have examined N. rajah and other unusually large Nepenthes species and found that they have evolved a symbiotic relationship with rainforest rodents. The geometry of these giants was found to perfectly suit the size and shape of mountain tree shrews (Tupaia montana). Attracted to a buttery substance produced by the plant, they sit perched on the rim and defecate into the pitcher as they feed. There have even been suggestions that the substance may have laxative effects, ensuring the visiting rodent makes a deposit before leaving.

For those skilled in Latin, the name Nepenthes bicalcarata will give away one of two striking features of this species. 'Bi', meaning two, and 'calcarata', meaning spurred, denotes the two thorns that lurk like fangs beneath the lid of this Bornean pitcher plant.

Studies have suggested their sharpness may offer some protection from the destructive paws of inquisitive mammals. The tapered thorns also boast one of the largest nectaries observed in the plant kingdom, perhaps luring prey to a more precarious position so they more readily fall to their death.

The second feature may seem bizarre for an insect scoffing plant – mature N. bicalcarata plants are home to a colony of carpenter ants. This is no invasion, but a mutually beneficial relationship between a landlord plant and its six legged tenants. The plant provides a home by forming hollow tendrils for the ants to nest in. This makes it possibly the only example of a plant species that is both carnivorous and an ant plant.

This cosy abode doesn't come without a price and the colony pays its rent in several ways. The rims of the pitchers, called the peristomes, are kept in pristine condition by the tenants, which regularly remove debris and fungi. This benefits the plant because a clean peristome is a slippery one, making the trap more effective.

Another payment is protection from pests. Ants will attack herbivores that attempt to eat the plant. The ants are also skilled divers, plunging into the pitcher fluid to retrieve large prey for themselves. While this may seem like stealing, it is believed to extend the trap's lifespan by discouraging rot. N. bicalcarata pitchers continue to catch prey up to three times longer than other ant-less species. Plus, the excrement produced by its tenants is also a source of nutrients for the plant.

When Nepenthes ampullaria was first discovered, it probably perplexed botanists as to why it looked so different to other pitcher plants. Carpeting the forest floor in tight clusters, the plant lacks the lianas (vines) that reach high into the canopy that are present in other Nepenthes species.

It also has an unusually small lid that offers little protection against dilution of the pitcher fluid by rainwater, and even its microstructure is devoid of the usual repertoire of carnivorous mechanisms. Luring nectar glands are barely present and there are no lunate cells, which interfere with invertebrate claws to prevent them from climbing out of the pitchers.

It turns out the plant is, in fact, a vegetarian. Molecular analysis has uncovered that it relies on falling leaf litter as its primary nitrogen source, explaining its prime position below the rainforest canopy and a lack of carnivorous toolkit.

Each pitcher is home to a number of invertebrate species, mainly mosquito larvae. These shred and digest leaf detritus, excreting nitrogen as ammonium ions, which the plant's digestive glands absorb. Tadpoles of the Bornean chorus frog also inhabit the pitchers, probably because the traps provide a stable aquatic nursery. These likely also contribute towards leaf litter digestion and nutrient supply.

Nepenthes have turned the tables of the conventional plant-animal relationship, evolving to become a skilled hunter of the tropical rainforest. In doing so, they illustrate how fascinating, intelligent and complex plant life can be.

Never be fooled by the quietness or stillness of plants: they produce the food we eat, emit the oxygen we breathe, synthesise our life-saving medicines and even put the clothes on our backs. To ignore the place of plants in the world is unwise, especially when some would eat us given half the chance.