The challenges of the modern world are testing our architects to the limit. Not only do we desperately need more affordable housing for our growing population, but our buildings have to be as energy, water and space efficient as possible.

The latter are problems that also challenge living organisms and that evolution has been addressing since the dawn of time. Little wonder, then, that architects and designers are increasingly turning to nature for inspiration. This area of research – using efficient biological designs in man-made constructions – is known as biomimetic architecture.

It should be emphasised that this is completely distinct from using natural motifs simply for aesthetic decoration. As Jamie Dwyer, a biologist and design strategist for the Biomimicry 3.8 Institute, says, it is "the conscious emulation of nature's genius – consulting how other organisms succeed, and then bringing that understanding into design".

An early example is considered to be the columns of Antoni Gaudi's Sagrada Família church, begun in 1882. To support the weight of the vault, Gaudi modelled these on the branching pattern of an upright tree, noting how this efficiently bore forest canopies. However, other instances of biomimetic architecture can look far removed from their natural origins, as the examples here show.

Although more often likened to a vegetable, the famous 180m high Gherkin tower in London (30 St Mary Axe) was actually inspired by a curious marine animal known as Venus's flower basket sea sponge (Euplectella aspergillum). This exquisite creature is named after its hollow tubular structure (or 'basket'), supported by a lattice-like skeleton. Although it may look delicate, E. aspergillum makes its own fibreglass by extracting silicic acid from seawater and converting it into silica.

This is then fashioned into small, six-pointed spikes (or 'spicules'), which are arranged vertically, horizontally and diagonally to form a cage-like structure. This organic scaffold provides immense mechanical strength, enabling these sponges to live at depths of up to 1km.

Meanwhile, silica-based cement, deposited on the points of intersection in the lattice, provides reinforcement, enabling the structure to flex without damaging the core arrangement. The mesh-like construction also effectively filters water: flagella on the cells lining the inner tube provide a motile force that draws water (and hence nutrients) in through the openings in the lattice.

The external scaffold of the Gherkin mimics the lattice arrangement of E. aspergillum. The curved sides allow winds to pass easily around the building, rather than being deflected down to street level to blast pedestrians.

Because more air can flow around the side of a cylinder than the corner of a rectangle, its speed increases, causing a higher negative air potential at the back of the building. Architects Norman Foster & Sons used this to drive a natural ventilation system. Large vents at street level suck in air and funnel it upwards throughout the building, reducing the need for air conditioning by 50%.

Inside their towering mounds, Zimbabwean termites farm Termitomyces fungi as their principal source of food. It is critical that the fungi remain at their optimum temperature, even while the outside temperature fluctuates between below 0°C and over 40°C.

Consequently, termite mounds have an elaborate system of heating and cooling vents to allow for tight temperature regulation. Vents at the base of the mound catch breezes and funnel these along muddy passageways, lowering the temperature of the air. Convection currents then draw the cool air up into the warmer parts of the mound, before it exits out the flue at the top.

The concept was used to develop a 'passive cooling system' for Zimbabwe's largest shopping complex, the Eastgate Centre in Harare. During the day, heat energy generated is stored in the building's internal fabric: because this has a high heat capacity, it only causes a minimal temperature increase. At night, the warm air is vented through a central chimney, causing cooler air to be drawn in at the base of the building.

These mechanisms cool the complex before the next day and reduce the energy requirements to less than a tenth of those of a conventionally cooled building of the same size.

Besides whole buildings, biomimetic principles can also be applied to smaller structural details, particularly those that endure a lot of wear and tear.

Mechanical devices such as joints and bearings are prone to failure and dysfunction. Professor Jan Knippers, of the Institute of Building Structures and Structural Design (ITKE) at the University of Stuttgart, decided to investigate the moving parts of the bird-of-paradise flower (Strelitzia reginae), pictured below. 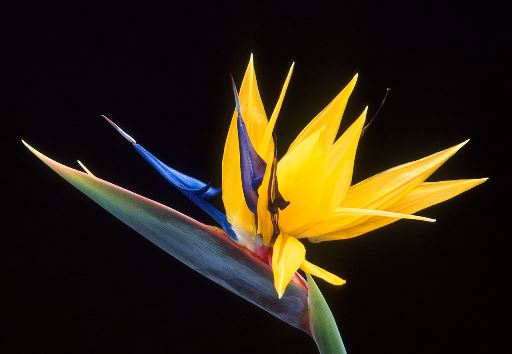 Renowned for its striking blooms, the plant has an ingenious, hingeless lever that can be elastically deformed time after time without compromising its structural integrity. S. reginae's flowers are made up of three upright orange sepals and three violet petals, two of which are fused to form a 'perch', with a cavity at the base containing nectar. The plants are pollinated by sunbirds, which land on the perch to reach the nectar. As a bird lands, the weight of the bird causes the perch to bend downwards, triggering the wings of the petals to flap sideways in an elastic movement.

This exposes the stamens, allowing pollen to be transferred to the bird's feet. When the bird leaves, the perch closes again, enclosing the stamens once more. Remarkably, this deformation is completely reversible, with biomechanical tests suggesting that it can occur more than 3,000 times without structural damage.

A closer investigation of the flower's structure reveals how it works. The perch is bilaterally symmetrical, with three reinforcing lateral ribs on each side; the two upper ribs carry the thick wings of the petal that cover the stamens. Tough, fibrous tissue makes the ribs strong enough to support a bird's weight, but the area between the upper ribs and the wings is more elastic. Hence, when the bird lands and the perch is deformed, the energy is transferred to this region, flipping the petals up and sideways. Once the bird leaves, the linkage of the structural elements allows the elastically stored energy to reset the whole system.

As part of a collaboration with the University of Freiburg and the Institute of Textile Technology and Process Engineering, Denkendorf, Knippers helped to develop a hingeless flapping mechanism inspired by the bird of paradise flower.

The Flectofin incorporates a thin shell-like element (the fin) attached to a central rib. These are made of fibre-reinforced polymers that confer high tensile strength but also low bending stiffness (see From flower to Flectofin, below). This simple structure can be made into a shading mechanism with no hinges and joints. The design is particularly suited for buildings with curved glass facades, which are otherwise difficult to shade.

The concept has even been scaled up to the level of entire buildings, an example being the Thematic Pavilion in Yeosu, South Korea, designed by Knippers Helbig engineers. Here, the gill-like facade is composed of 108 individually controlled fins, each a modified form of the Flectofin. When compression is applied to the opposite corners, controlled buckling deforms the plate, causing it to change shape. Besides enabling the building to adapt to changing light conditions, this design reduces strain loads, allowing the building to withstand high winds.

The Core of the problem

The Eden Project in Cornwall may be famous for the biological diversity within its iconic glasshouses, but biology inspired the innovative architecture of its visitor centre and exhibition hall, known as the Core. The building was intended to have a symmetrical, spiral-shaped roof, but architects struggled to formulate a design with the right structural integrity.

The solution came from studying the spiral growth patterns of plants, especially the sunflower. In nature, spiral patterns are rarely symmetrical, but are instead offset. This can be seen in the seed pattern of a sunflower head, made up of two sets of opposing spirals, one set going clockwise and the other anticlockwise.

To pack in as many rows of seeds as possible, the number of spirals in each direction is based on the famous Fibonacci sequence, where each number is the sum of the previous two: hence the sequence starts with 0, 1, 1, 2, 3, 5, 8, 13, 21, 34, 55... Accordingly, a sunflower head typically has 34 clockwise spirals and 55 anticlockwise spirals.

In nature, Fibonacci sequences occur time after time, as they use space so efficiently. In the Core, Fibonacci spirals were used to construct the web of 335 interlocking timber beams supporting the roof, with 21 spirals in one direction and 34 in the other. The result provides a robust shelter, dappled natural lighting and even generates power from photovoltaic panels.

Some architects say biomimetic architecture should go beyond designing buildings and start to consider the world around them too – just as no organism exists in isolation.

"Biomimicry can learn from nature at a system level and be applied to entire neighbourhoods, cities or regions," says the Biomimicry 3.8 Institute's Jamie Dwyer. "Cities need to perform like ecosystems, so we need to ask how every building will purify the air, create soil, store carbon."

The institute is developing a set of ecological performance standards to provide metrics to help developers design urban areas that don't compromise ecological functionality. Dwyer hopes this will help to create "cities that function like the natural landscapes they cover, not only to provide vital ecosystem services, but also so that they are resilient, sustainable and life giving".

The future may seem daunting, but as we plunge deeper into nature's secrets, who knows what solutions we will find next.

The hingeless lever of the bird of paradise flower (above) was the inspiration for the Flectofin and scaled up to the Thematic Pavilion in South Korea.

A Flectofin, inspired by the bird of paradise flower. (ITKE University of Stuttgart)

Bending the central rib of the Flectofin induces torsional buckling, causing the lateralshade to flip sideways by up to 90°. This simple structure can be formed into vertical blinds for a versatile shading mechanism with no hinges and joints. The Thematic Pavilion's gill-like facade (below) is composed of 108 fins, each a modified form of the Flectofin. 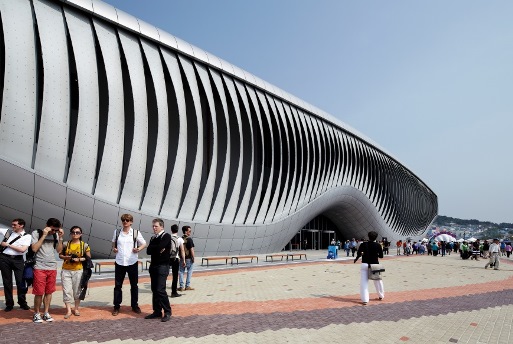 The Thematic Pavilion, South Korea, with vents inspired by the bird of paradise flower (Strelitzia).

Caroline Wood AMRSB is a PhD student at the University of Sheffield, researching parasitic striga plants which devastate food harvests. She blogs at www.scienceasadestiny.blogspot.co.uk