Fernando de Noronha is an unrivalled paradise on Earth. The archipelago, once visited by Darwin, lies 350km off the north-east coast of Brazil and attracts tourists from all over the world, especially those on honeymoon or looking for a relaxing break of swimming, diving and observing wildlife. On a family trip in 2004, Felipe noticed an unusual cururu toad (Rhinella jimi). It appeared to be missing its eyes.

It didn't take long to spot that many toads were blind with the same abnormality. Intrigued, four years later Felipe started a long term project to understand what was happening on Fernando de Noronha.

Our first goal was to characterise the toad population, describing all abnormalities that we could find at that time. It turned out that about half of the population had at least one abnormality. These included a lack of one or both eyes, a reduced or increased number of digits on their feet, and rotations and unusual fusions of bones. With such a high prevalence of abnormalities, it was clearly a world malformation hotspot[1].

After describing such a case, the obvious question was how did they become so unusual? Several hypotheses have suggested causes for amphibian malformations, including chemical pollutants, overexposure to UV-B radiation, parasite-driven malformations or inbreeding.
If pollutants, radiation or parasites were a factor on Fernando de Noronha, it would be expected that the toads would become malformed early in their development. Therefore, we searched for tadpoles and juvenile toads (as we initially only examined adult morphs). We found that the tadpoles were also highly unusual. About 50% of them were anomalous, with unusually arranged mouthparts (jaws and teeth rows).

When we raised them in captivity, we made an even more interesting observation. Some of the normal tadpoles grew into normal adults, but some of them became abnormal adults. The same pattern was observed in the abnormal tadpoles: they generated both adult forms[2]. With this result, we couldn't rule out any of our previous hypotheses.

Still pursuing our answer in 2014, we examined the health of the toads, searching for parasites and diseases, and looking at their abnormalities more closely. We performed postmortem examinations on several toads and collected samples for histology, parasitology, radiology and molecular assays. Analysing this material, we found several parasites and some diseases.

In general, we found high rates of abnormalities and an unusually high prevalence of mycobacteriosis, a bacterial disease that is uncommon in wild animals (mycobacteriosis is a zoonotic disease – that is, it can be transmitted to humans). Besides these bacteria, we also found a brain parasite, lots of ticks, and lung and gastrointestinal parasites. Yet, in spite of all that, the toads seemed to be thriving.

Using microscopic analysis of their abnormal bones (Figure 1), we have not yet found any infectious agent, such as a parasite or bacteria, that could be causing these problems. 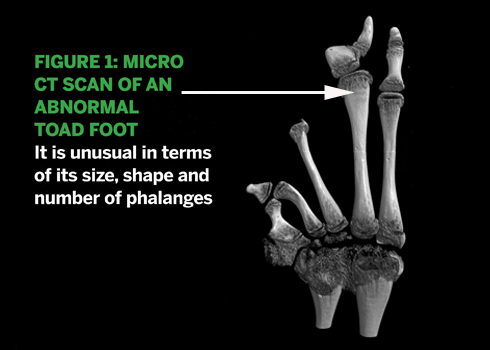 Among the blind toads, some had microphthalmia (an unusually small eye as a consequence of developmental defects), and others had a shrunken non-functional eye, known as a phthisis bulbi, possibly as a result of a severe ocular injury or disease. Some toads had cataracts, which is the opacification of the eye lens. However, it was still difficult to explain the origin of such diverse eye problems.

We were also interested in how blind toads could live. Answering this could help us understand the origin of blind animals, the evolution of animal behaviour plasticity and invasion biology. We conducted a series of observations and experiments that showed that shifts in feeding and hunting, as a consequence of vision loss, influenced diet with subsequent impact on overall body condition and reproductive effort[3].

A cascade effect of this kind had not been previously reported. Shifts in feeding occurred as blind toads hunted as sit-and-wait predators instead of actively chasing the insects as they would normally. They used touch rather than sight to sense insects crawling on them. Such a different strategy led to a different diet, as they could no longer select the same food items as sighted toads. As a consequence, blind toads had a poorer body condition (a relationship between size and mass) than normal ones, and blind females produced fewer eggs than normal ones.

This difference could be a problem on the mainland, but in Fernando de Noronha, the unsighted toads thrive. This population was introduced to the island about 100 years ago, probably to control crop pests or mosquitoes. In this invaded environment, they lack most of their natural predators and competitors, and their success must be linked to that. Besides, these females can lay more than 50,000 eggs. All in all, being blind in paradise is not so bad for the cururu toad.

We now know of another island in the North Atlantic, Bermuda, which has similar malformed and blind toads, also of the genus Rhinella (R. marina). As such, we are planning to collect samples from this and other sites where R. jimi and R. marina toads were introduced, and compare the genetic diversity between Fernando de Noronha, Bermuda and other invaded sites where toads are normal, such as in the Caribbean islands, Hawaii and Australia. Based on that, we hope to show – or, indeed, rule out – the possibility of inbreeding as a causative agent of the reported high rates of abnormal toads on some islands.

If we can rule out an inbreeding effect, pollutants would be the next hypothesis to test. Pollutants have been linked to limb malformations in toads from Bermuda[4]. Observing pollutants in toads may also show that tourists in Fernando de Noronha are exposed to such chemicals.

Luís Felipe Toledo is professor of vertebrate zoology, curator of an amphibian and reptile museum collection, and coordinator of an animal sound archive at Unicamp (Universidade Estadual de Campinas), Brazil. Dr Catia Dejuste de Paula is a veterinarian working in amphibian health and conservation. She is a postdoctoral Fellow at San Diego Zoo Global and a researcher at Triade, the Brazilian Institute for Conservation Medicine. Allan P Pessier is a senior veterinary pathologist at the Institute for Conservation Research of San Diego Zoo Global. He directs the Amphibian Disease Laboratory.