Extremophile microorganisms, which thrive in physically or geochemically extreme conditions, arguably represent the most numerous forms of life on Earth.

They are present in diverse genetic lineages of bacteria and archaea that range all around the globe in particular environmental niches, including hot springs and around deep-sea hydrothermal vents where the water is very hot (thermophiles and hyperthermophiles); in saline ponds and salt lakes such as the Dead Sea (halophiles); in marine and salt marsh environments, where salt concentrations fluctuate over a broad range (halotolerant bacteria and archaea); in highly alkaline and acidic pools (alkaliphiles and acidophiles); and even inside hot rocks deep under the Earth's surface.

An organism found at the summit of a mountain in the Atacama Desert in South America is both a xerophile and psychrophile – thriving in low water availabilities and at cold temperatures.

The physical chemistry of extreme environments poses a serious challenge to biochemistry. In halophiles, how on Earth does DNA-protein recognition take place in molar salt concentrations?

Concentrations of over 150mM salt in the Eppendorf tube are considered to be restrictive for protein-nucleic acid recognition because they shield crucial electrostatic interactions.

To misquote Galileo – "And yet they are alive" – to the extent that one could question if there are any limits to adaptation in biology. (Well, yes, there appears to be a limit. So far, no organism has been discovered that can thrive in the absence of liquid water, although organisms can survive extreme drought by entering a dormant state.)

Different types of halophiles have solved the problem of how to cope with salt stress (and often with other forms of stress as well) in different ways. The study of adaptation to a high salt environment, beyond satisfying scientific curiosity, can teach us a lot about fundamental molecular interactions and responses at the higher cell biology level. It has also led to the discovery of novel chemical compounds with a variety of fascinating properties.

Liquid water and dissolved ions are essential to life processes: the biochemical role of an ion depends on its charge and on its chemical type; cell membranes in all organisms contain pumps to exclude Na+ and to concentrate K+ in the cytoplasm; and in nerve cells, electrochemical gradients form the basis of the action potential in nerve transmission.

As a result, life processes are highly sensitive to salt. Its concentration in the blood (physiological concentration) is 0.9% by weight – corresponding to about 150mM (millimolar) NaCl – and for a long time it was assumed that concentrations around 10 times higher (that is, in the molar rather than millimolar range) would be inhibiting to biochemical activity in general.

However, since the middle of the 19th century there has been increasing evidence that life in high salt concentrations is possible. Describing a salt lake in The Voyage of the Beagle, Charles Darwin wrote: "Parts of the lake seen from a short distance appeared of a reddish colour... How surprising it is that any creatures should be able to exist in brine, and that they should be crawling among crystals of sulphate of soda and lime!"

The discovery that an osmolyte (mainly KCl) balances the high salt concentration of the Dead Sea in extreme halophile archaea initiated an exciting era of research into the mechanisms that sustain macromolecular stability, solubility and activity in almost saturated salt conditions[2].

In contrast to the extreme halophile archaea, certain halotolerant bacteria use the osmolyte ectoine, a small molecule that holds both positive and negative electrical charges (known as a zwitterion). The bacteria produce ectoine in a controlled fashion to the appropriate cytoplasm concentration in order to counterbalance outside osmotic pressure.

One such example is Halomonas titanicae, recently discovered on the hull of the sunken RMS Titanic (see 'Biotechnological potential', below). As the outside salt concentration fluctuates, so will the organism's internal ectoine concentration in response.

Compounds such as ectoine are known as compatible solutes in the sense that their occurrence within the cytoplasm does not interfere with cellular biochemistry and metabolism. By this adaptive regulatory process, Halomonas is halotolerant over a broad range of salt concentrations.

Ectoine, which displays an indirect stabilising effect on proteins and membranes, and a related inhibitory effect on inflammation in mammalian cells, has found broad cosmetic and clinical applications through its hydration, stabilisation and inflammation-reducing properties – for example, for the treatment of allergies, atopic dermatitis, and cough and cold symptoms.

Since liquid water is so essential to biological processes, a collaboration between the Institut Laue-Langevin, the Institut de Biologie Structurale, the Max Planck Institute of Biochemistry and biotech company bitop AG addressed the question of how ectoine affects water structure, as well as protein and membrane hydration.

Although many spectroscopic and thermodynamic investigations have been done on ectoine before, the use of neutrons has allowed a novel, direct characterisation of ectoine-water-protein and ectoine-water-membrane structures to explain the mode of action of this useful molecule.

Neutrons have a number of advantages, including their high penetrative power, low radiation damage to the sample, and variable magnification that allows the study of both the crucial hydrogen-bond formations at the atomic level to the larger protein and membrane structures.

H2O molecules in liquid water interact with each other through a highly dynamic fluid network of hydrogen bonds (H-bonds) between the oxygen and hydrogen atoms of adjacent molecules.

The presence of other substances in the water can hamper this organisation. Not only does ectoine not interfere with the cell metabolism, it seems to enhance the dynamic properties of H-bonds in water – properties that are essential for water's solvent capabilities, and vital for the proper organisation, stabilisation and function of proteins, lipids, membranes, RNA and DNA.

Ectoine acts by leaving the shell of water on protein and membrane surfaces intact, which is essential to their biological activity[3].

The search for life on Mars and elsewhere in the universe is guided by a search for liquid water. The study of molecules such as ectoine illustrate how life can create compensating effects that respect water's essential biological properties. 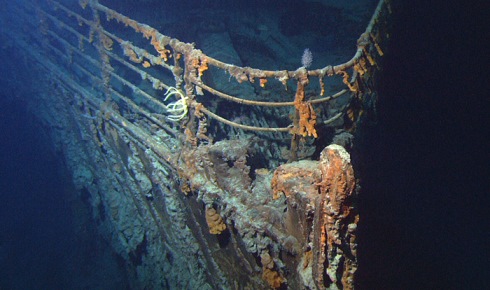 Bacteria isolated from salt marshes or marine environments include a variety of interesting species with biotechnological potential, such as the recently discovered Halomonas titanicae, found in the hull of the sunken RMS Titanic[1]. Halomonas does not live in a constant salt environment. Because of evaporation, tides mingling with fresh river waters in salt marshes and currents in the oceans, salt concentrations in these environments fluctuate over a broad range from 0.5% to 25% NaCl (on average, sea water has a salt concentration of 3.5%).
It has been estimated that the action of this rust-producing Halomonas may bring about the total deterioration of the Titanic by 2030. For the same reason, Halomonas has been identified as a potential danger to oil rigs and other man-made objects in the deep sea. However, the rusting property could also be harnessed in bioremediation or waste management – for example, to accelerate the decomposition of shipwrecks littering the sea floor.

Joe Zaccai is emeritus director of research at The National Center for Scientific Research (CNRS) at the Institut Laue-Langevin and the Max Planck Institute of Biochemistry, Grenoble.