It's all about the algae

When people think about algae in rivers, pollution and eutrophication normally spring to mind. Martyn Kelly explains how initiatives such as the EU's Water Framework Directive have helped us better understand the contribution of algae to healthy waterways

Imagine for a moment that you are looking at a perfect stream. What do you see? Your answer will probably depend on where in the country you live, but it is unlikely to involve large, unsightly growths of algae.

Algae are in fact an important part of stream ecosystems, but we often only notice them when the natural balance is upset and they can proliferate.

Take a tentative step into any stream, even a crystal-clear one, and you will feel the stones that make up the bed of the stream are slippery to the touch. If you rub off a small part of this slippery surface and put it under a microscope, you'll see that it is teeming with algae.

This little-known group constitutes 75% of all the plant species recorded from the UK – and a large part of the evolutionary diversity of all photosynthetic organisms, too.

Until the turn of the millennium, applied scientists' interest in freshwater algae was mostly focused on the problems they caused. It was well understood that an excess of inorganic nutrients leads to accelerated growth of algae in lakes and reservoirs, and has consequences for water managers: clogged filters in water treatment works, taste and odour problems and, in particular, blooms of toxic blue-green algae (now known as cyanobacteria).

In 2000, however, the European Union's Water Framework Directive (WFD) was enacted, bringing with it a paradigm shift in how we evaluate the quality of water. Before the WFD, we evaluated water primarily in terms of an absence of undesirable properties. The WFD turned this logic around and brought in definitions of 'ecological status' that focused as much on the presence of positive attributes.

At the same time, it specified the groups of organisms that needed to be considered and one of these, for freshwaters, was the phytobenthos – the algae found attached to submerged surfaces. 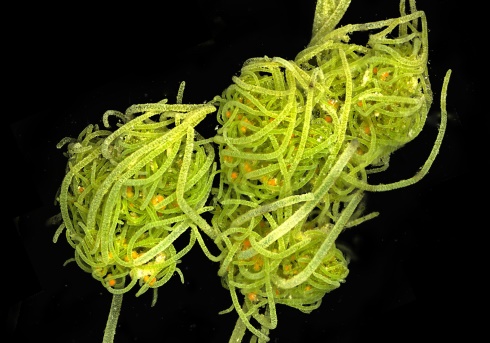 While we all had a reasonable idea of what algae to expect in an obviously polluted river, knowing what to expect at the opposite end of the water quality gradient was more of a challenge. There was plenty of anecdotal information available, but few rigorous studies of what is found where. This was key to all the methods developed for the WFD: not only are the expectations for a Pennine burn different to those of a chalk stream in Hampshire, but the implementation of the directive needs to be consistent between the different countries of Europe, too.

This means that a set of sites that are as close to natural as possible are needed in order to act as benchmarks against which all others can be judged. However, this is a real problem in the UK, with its long history of human alteration of the environment – and, indeed, in most other parts of Europe. What do we understand by 'natural'? Does it mean streams flowing through a landscape clothed in primordial forest or do we accept a measure of human alteration?

In practice, there needs to be enough of these benchmark streams to both cover the diversity of habitats and permit adequate replication of naturally variable systems. The criteria also need to work across national boundaries, so that 'good status' (the target of the WFD) means the same in Germany and Poland as it does in the UK.

After much debate among ecologists from all over the EU, 'reference sites' were defined on the basis of low population density, low levels of urbanisation, intensive agriculture and industry in the catchment, plus a natural flow regime. Some (notably the late Brian Moss) regarded this as a dilution of the original high ideals of the WFD, but most recognised that this was a pragmatic solution to a complicated issue. That the UK still struggles to achieve the WFD targets for many lakes and rivers suggests that this compromise was small relative to the overall scale of the problem.

With the benchmark defined, the task facing regulators is simply to compare the algae from any stream or lake with what should be there. In other words, 'observed' versus 'expected', with the outcome termed the 'Ecological Quality Ratio'.

However, faced with more than 5,000 species of freshwater algae recorded from the UK and Ireland, how do you go about doing this? Practice around Europe varies, but most countries have focused on a single group, the diatoms, which would probably have been the most common type of alga in that imaginary sample from earlier.

Diatoms are microscopic algae whose yellow-brown colour betrays affinities with the brown seaweeds of our coastlines and whose most noteworthy feature is a beautifully sculpted silica cell wall (imagine the best crystal glass, but on a microscopic scale). Biologists working for water agencies in France have been using diatoms to assess water quality for a number of years, and the UK had picked up on the idea to help with implementation of an earlier directive on urban wastewater.

The Trophic Diatom Index provides an indication of the effect of nutrients (especially phosphorus) on stream ecology and, by calibrating these observed measurements against expected values from a subset of sites at 'reference condition', you have a simple measure of ecological status. A catchy acronym, DARLEQ (Diatoms for Assessing River and Lake Ecological Status) was devised and the UK's environment agencies could start the task of evaluating the condition of our water bodies. 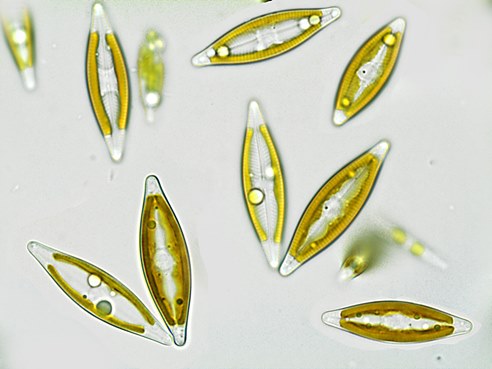 DARLEQ and similar methods developed for the same purpose elsewhere in Europe were radical in that they present a view of the condition of algae in freshwaters that is not focused purely on negative properties. That, strangely, has presented those of us involved with the method with a substantial challenge that has little to do with science and much to do with public perceptions of the environment.

The problem is that when DARLEQ identifies a stretch of river as being less than 'good', the WFD specifies that steps need to be taken to restore good status. This often involves utility companies improving effluent quality – for example, by reducing the concentration of nutrients such as phosphorus, the costs of which are passed to their customers.

They, in turn, are entitled to ask why. In many cases, the high standards that the WFD sets mean that the public may feel they are paying for improvements to a river that, to a lay person, already appears to be in reasonable condition.

Buried in the WFD is a clause that says improvements to good status are not necessary if the costs are "disproportionately expensive" (article 4 paragraph 5) and I have met utility company staff who question whether an improvement in the type of diatoms present alone is enough to justify the expense of investing in better sewage treatment. The answer, of course, is that the diatoms should be an indicator of the health of all the microscopic life in the stream and that this, in turn, supports the more aesthetically appealing components of the ecology. This message, however, has been slow to permeate.

The need for results of ecological assessment methods to be understandable beyond a narrow group of specialists was one factor behind the development of a new approach: Rapid Assessment of PeriPhyton in Rivers (RAPPER). This is a quick survey method that focuses on those algal growths that can be seen with the naked eye.

Remembering my first lesson in the effect of freshwater pollution on invertebrates on an A level biology field course, I set out to devise an approach whose rudiments could be taught in an afternoon. Unsightly filamentous green algal growths that smother the beds of many of our lowland rivers are good indications that a stream's quality is compromised, but RAPPER also includes a list of algal genera that are characteristic of good status or better. Initial trials have yielded promising results and the Freshwater Biological Association is exploring the possibility of using RAPPER as a citizen science tool with the Riverfly Partnership. 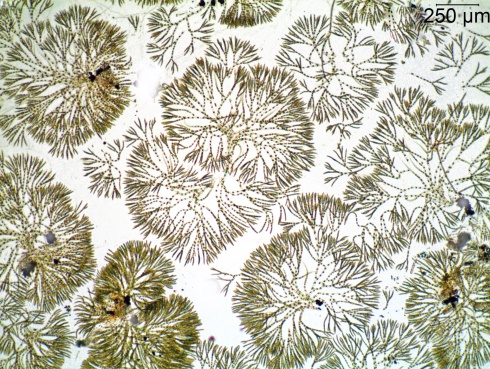 In considering these developments, however, it is impossible to ignore the political backdrop: first, the austerity measures introduced across government departments since 2010 and, more recently, the spectre of Brexit.

Brexit may drive ecological assessment in interesting directions, although it is too early to make predictions with confidence. It could, for example, force our environmental regulators to rethink approaches, but it may also have some very negative outcomes.

The European Union (Withdrawal) Bill will see most existing EU law written into UK statutes, after which, over time, legislation will be revised and Parliament (and, where appropriate, the devolved assemblies) will be able to decide which elements of that law to keep, amend or repeal. When the time comes for the nuts and bolts of the WFD to come under examination, the statutory requirement to monitor inconspicuous components of ecosystems, such as diatoms, may well be quietly dropped.

This is partly because of the remorseless pressure within the public sector to drive down costs and the lack of awareness of their contribution to ecosystem services within the management hierarchy. However, it is also because scientists who study these organisms have paid little attention to explaining benefits in terms that mass audiences can understand.

The time has come to tell the public more about the role that these important members of ecology's 'back office staff' play in maintaining healthy ecosystems.

Martyn Kelly is a freelance environmental consultant with an interest in the ecology of freshwater algae. He blogs at
microscopesandmonsters.com