Why does calorie restriction increase lifespan in model organisms? And what does it mean for wild populations and human longevity? Jana Stastna explains

Many magical remedies and substances have claimed to prevent ageing and offer immortality, but it was not until the 19th and 20th centuries that a steady growth in life expectancy has been delivered – the result of improvements in public health, medicine and nutrition rather than any medical panacea.

However, a longer life can lead to an extended period of ill health. Despite great improvements in medical research and healthcare, the ageing population remains profoundly vulnerable to both infectious and non-infectious diseases. It is therefore important to seek answers to very serious questions about the long-term health of our ageing population, and how we might reduce severe disability from common diseases and health conditions.

Historically, an important question has been to determine the degree to which studies on ageing in non-human organisms are informative about the mechanisms of human ageing. Although it is not possible to answer this question definitely, a large body of work supports the idea that the basic principles of ageing are broadly conserved across species. That is, that mechanisms identified in commonly used model organisms also function in other species, including humans. One such mechanism is behavioural manipulation by dietary restriction (DR).

DR is, to this day, the only natural intervention known to reliably extend lifespan in model organisms. DR has also been shown to prevent age-related diseases such as cardiovascular disease, diabetes and dementia. For example, DR started in young rhesus monkeys greatly improves metabolic health, and reduces the risk of developing cardiovascular disease, obesity and cancer. DR, therefore, appears to act generally in keeping organisms free of age-related diseases for prolonged periods of time.

The lifespan of an animal is regulated by diverse genetic and environmental factors, with many of the crucial mechanisms evolutionarily conserved across species. Mutations that postpone senescence were first discovered in worms and led to the discovery of the crucial role of the insulin/insulin-like growth factor (ILS) signalling pathway in regulating lifespan in a huge variety of different organisms. 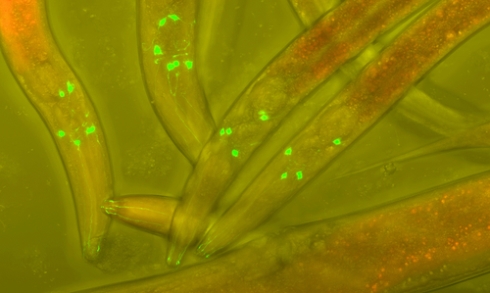 C.Elegans, one of many model organisms in which DR appears to extend lifespan.

Investigation of this pathway in the roundworm Caenorhabditis elegans has allowed extensive characterisation of downstream elements of metabolic signalling and of mutations in the ILS pathway that retard the process of ageing. Due to their genetic similarity, C. elegans is one of the fastest, cheapest and most efficient model organisms to learn about such pathways. For example, worm experiments have suggested that the protective effect of DR can be attributed to a reduction in oxidative damage by reactive oxygen species (ROS) and protection of mitochondrial structures. ROS, which are generated during normal cellular metabolism, can cause damage to molecular components, resulting in decreased production of ATP, structural damage to proteins and eventually cell senescence.

Another application of using dietary-restricted worms is to investigate age-associated loss of muscle mass and function. Thanks to the similarity of humans and worms, we can study muscle degeneration in worms and apply knowledge gained to age-related muscle wasting conditions in ourselves, such as sarcopenia.

For example, at Canterbury Christ Church University, we have investigated the effect of various DR regimens on populations of transgenic worms containing fluorescently tagged unc-54 (myosin heavy chain gene), which effectively provides an in vivo read-out of muscle health as the animal ages.

DR methods
There are two main methods of restricting diet in both vertebrate and invertebrate organisms. Chronic DR involves restricting calories by typically 20–40% of ad libitum (the average amount ingested if controls are not in place). When started at an early age, animals on this regimen are generally smaller in size when compared withthe control[4].

Alternate-day fasting and intermittent fasting involve withdrawing food completely for set periods with ad libitum feeding on non-fasting days. In rodents, fasting every other day or twice weekly extends lifespan up to 30%, regardless of both total food intake and weight loss[5]. Animal models in these trials are of a normal size when compared with control groups[6].

Interesting as they are, most of the DR experiments we do are performed on laboratory-adapted strains in laboratory conditions, where there are no predators or pathogens, and lifestyles tend to be sedentary. This therefore raises questions about the ecological relevance of our DR studies. As a part of my PhD thesis, I have investigated natural variation in lifespan in C. elegans wild isolates (worms freshly collected from the wild) in response to DR.

Natural variation can be defined as the genetic diversity within the same species in the wild. I found that DR affects lifespan in a genotype-specific manner. While overall DR had a life-prolonging effect on most wild isolates, there were some isolates that showed no lifespan increase whatsoever and even a few where DR seems to shorten the average lifespan[1]. This result emphasises the notion that environmental factors such as diet have effects that are utterly dependent on the underlying genotype. You are what you eat? No – you are how your genes respond to what you eat.

DR's early years
The first recorded DR experiments were carried out in the early 20th century to observe how malnutrition in rats and trout affected lifespan[7–9]. It was Clive McCay who first noticed that growth-retarded trout outlived the control population[9] and his 1935 study on rats is considered the beginning of modern DR studies[10]. Over the past 100 years, many different species, from wide taxonomic groups from rotifers, worms, flies, spiders, fish, rats and mice to monkeys, have been found to be affected in a similar way by DR.

One possible explanation for the difference between wild-derived strains and lab-adapted strains is that there are hidden fitness trade-offs. One of these could be the immune system. Does maintaining a complex immune system in the wild, where pathogens abound, come at the expense of lifespan (or, more properly, diet-influenced lifespan)?

To this day, more than 1,000 C. elegans genes have been reported to influence lifespan. While some of these genes are specific to the worm, many affect ageing in wide taxonomic groups and, indeed, in humans. For example, daf-16 is a central component of the evolutionarily conserved ILS pathway in worms. The human version of this gene, FOXO3, is crucial to many cellular processes, such as the regulation of apoptosis, cell-cycle progression and oxidative stress resistance.

Genetic association studies of single-nucleotide polymorphisms (or SNPs – variations in single nucleotides that account for variation in observable phenotypes) spanning the human FOXO3 gene have revealed that some variants have significant association with extreme longevity[2]. Another gene from the worm ILS pathway is akt-1. The human homologue of this gene, AKT, has also been identified to be significantly associated with lifespan. These genes and many others have been elucidated through DR studies in the humble worm.

It is also true to say that the mechanisms underlying dietary restriction are still not fully understood and important questions remain regarding the biology and evolutionary purpose of DR. DR-extended lifespan is mostly, but not always, coupled with a reduced rate of reproduction, and one of the earlier evolutionary hypotheses was that nutrients were reallocated between reproduction and survival in DR-treated organisms.

The basis of this theory was simple: in time of plenty, an organism invests in growth and reproduction, but when resources are scarce, the nutrients are reallocated for maintenance and repair. This idea, however, appears to be at odds with the boom-and-bust lifecycles of species such as yeast, worms and flies. In times of plenty, these invertebrates rapidly consume all available food and reproduce. When the food is gone, most of the population perishes, leaving few survivors to search for new sources of food. Further, given that most animals in nature do not live until a ripe old age, saving resources for later and postponing reproduction may not be the best strategy.

DR models seem to make much more sense in vertebrate models. Given that a consistent abundance of food has only been a feature of humans' very recent past, we are likely to have evolved under conditions of periodic fast/starvation or under general resource-limited conditions. It is therefore likely that natural selection would have optimised fitness for such conditions[3].

So what have we learnt from DR studies so far? Beyond the potential of DR to affect human lifespan, DR studies on animal models have been extremely useful in defining genes and molecular pathways involved in ageing, some of which appear to be highly conserved and therefore applicable to human health.

To this day, DR is considered the most robust life-extending intervention across all animal groups. As a result, an increasing number of people are self-imposing prolonged DR regimens. Early results showing improvement in metabolic and hormonal risks, but long-term chronic DR without malnutrition is difficult to practise and sustain for most people. The risks associated with an unbalanced diet include impaired menstrual and reproductive function, heightened fracture risk and other metabolic abnormalities. And for those thinking of embarking on such a regime anyway, think of the wild C. elegans isolates who responded to DR with a shortened lifespan: that could be you!

Overall, the main goal of DR research is to apply the knowledge gained in order to help us to understand the underlying molecular and cellular mechanisms of metabolism and ageing. Ultimately, this could allow for pharmacological replication of the effect without side-effects, while paying close attention to the underlying genetic context.

In ageing research, the key goal is to improve later life health, and therefore the quality of life, in an ageing human population – rather than simply to make people live for longer. And if this can be achieved without half-starving ourselves for most of our lives, what's not to like?

Dr Jana Stastna is currently working as a postdoctoral research and teaching fellow at Canterbury Christ Church University. Working in the Harvey Lab, she is investigating cold response in wild type C. elegans and stress response in genetically modified worms, as well as studying lifespan in GFP-tagged worms. @JJStastna