Mark Blaxter and Kazuharu Arakawa look at the remarkable physiology of tardigrades, and why their recent appearance on Star Trek caused a stir among those who study them

Science fiction loves a good monster, especially one inspired by the biology of obscure but amazing organisms on Earth. Parasitoid wasps inspired the creatures erupting from the chests of their unwitting human hosts in the Alien films, and nematodes were the likely models for the giant, drug-entrained worms of Dune.

Among our favourite research animals, the tardigrades have had starring roles in several sci-fi productions, most recently in Star Trek: Discovery. In this new series, the tardigrades are not only huge and critical to the storyline, but have some astonishing biology based loosely on published findings on real, Earthly tardigrades.

As biologists, we watch on-screen creatures with scepticism, but ultimately accept that these stories are fiction. Yet the Star Trek tardigrades sparked comment from biologists because they were based on a finding published in 2015 that has been roundly refuted.

We'll get to that debate – known as 'tardigate' – later. First, let's look at what makes real tardigrades here on Earth so uniquely fascinating.

Tardigrades are tiny animals (most less than 1mm) that live in water or the water film that surrounds sediment, mosses and lichens. There are about 1,000 known species, but more are described every year and DNA barcoding suggests that the true total may be much higher[1].

Because of their unique body plan, tardigrades form their own phylum, Tardigrada. Their mouth, with its pumping pharynx, is at the very anterior of the head, creating a characteristic 'face'. The pharynx has two stylets that are used to pierce food items before they are sucked up. They have four pairs of stubby legs, two for each of four body segments. They have a brain and paired nerve cords with four segmental ganglia along their ventral side.

A key feature is that they moult as they grow, placing them in the superphylum Ecdysozoa, which also includes the arthropods (insects, spiders, crabs and allies), the nematodes (roundworms) and other more obscure moulting groups.

Tardigrades live unassuming lives. They do not cause disease, they do not have any adverse effects on crops and they seldom feature in wildlife documentaries. They are well-loved, however. Most scientists and non-scientists who have found a tardigrade under a microscope comment on their 'cuteness' – a response enshrined in their common names: 'water bears' or 'moss piglets'. As they lumber around under the microscope, clinging on to moss leaves and (apparently) looking about with their tiny eyespots, it is easy to become involved in the drama of their lives.

Our interest in tardigrades stems from two scientific themes. One is a desire to know where they sit in the grand tree of animal life, and to use this information to understand how body plans evolve and where the most successful animals on the planet (arthropods and nematodes) come from. How is the body plan of tardigrades generated? What genetic systems do they and the other ecdysozoans share, and which are unique?

The other is a fascination with their biology. How does their physiology work? How do they achieve some of the feats of biology they perform, such as being able to come back from an apparently lifeless, desiccated state? 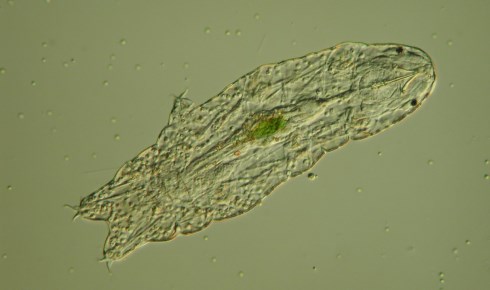 A light microscopy image of Hypsibius dujardini by Aziz Aboobaker. Its eyespots, three of its legs, and its algal stomach contents are visible

Tardigrades live in the sea, in fresh water and on land. In the sea, they are found from the seashore to the ocean deeps and, like other marine creatures, must therefore deal with pressure and oxygen availability issues. On land and in temporary bodies of water, tardigrades face very different challenges. Two-fifths of the Earth's land surface is classed as arid, but even in rainy temperate zones, dehydration is an ever-present threat.

Organisms resist this threat in one of three ways: migrating to places where water loss is minimised (deeper in the soil, for example), evolving waterproof outer coatings that restrict water loss (insect cuticles and our skin) or by evolving mechanisms that permit resuscitation after drying out.

For very small terrestrial organisms such as tardigrades, losing water is unavoidable, so tardigrades have evolved the ability to survive almost indefinitely without any water (anhydrobiosis). Many terrestrial tardigrades can lose essentially all of their body water, enter a dormant state and then come back to life when water is available again. Drying can be fast (minutes to hours) and rehydration completed in 20 minutes.

When dried up, tardigrades form a 'tun' – a collapsed form that looks a little like a small beer barrel. These microscopic tuns (less than a twentieth of a millimetre in size) are blown like specks of dust in the wind, so tardigrades can travel widely in this form. Some species are found worldwide, probably because they join the world's 'aeroplankton' and establish wherever they land.

Excitingly, tardigrades are resistant to all sorts of insults when in tun form – freezing and heating, pressure and radiation. To explore this resistance, tardigrades (Richtersius coronifer and Milnesium tardigradum) were sent on a European Space Agency mission and exposed to the vacuum of space and to direct solar radiation. A few survived[2].

If you look up a definition of 'life', it will likely contain something about reproduction and about carrying out directed biochemical reactions to further this goal – essentially, life has metabolism. As a tun, a tardigrade is not carrying out any biochemistry and has no metabolism. It is not making or consuming ATP. While it is a unique assemblage of particular proteins, lipids, nucleic acids and other metabolites, it is indistinguishable from dead or inorganic matter. So is a tun 'alive'? And does adding water to a tardigrade tun turn non-life into life?

We explore the biology and origins of tardigrades through their genomes. Tardigrades have relatively small genomes – from 50 to 400 million bases. Despite being small, sequencing a tardigrade genome is not that easy. Few can be grown in culture (we use Hypsibius dujardini and Ramazzottius varieornatus) and their DNA is locked within the tiny, tough exoskeleton, and so is much harder to get at than taking a sample from a plant or mammal.

A tardigrade adult only has 1,000 or so cells, so each tardigrade carries just 0.2 nanograms of DNA. We ideally want to start with a microgram or more, or 5,000–10,000 animals, although one of us (Kazuharu Arakawa) has developed a way to generate raw whole genome sequences from single specimens[3]. Not easy, but doable.

The other issue is contamination. The DNA we sampled was not just from the tardigrades, but also from the bacteria in their guts and attached to their surfaces. This contamination meant that we had to develop bioinformatic methods to separate tardigrade data from bacterial data – we call this 'blobology': separating out the blobs of data that come from different species in the mix[4].

Using features of the raw data (the proportion of G and C bases, and the number of times we sequenced each segment) and sequence similarity information (asking whether each sequence was more similar to bacteria or yeasts than animals), we separated tardigrade sequences from contaminants.

We produced genome sequences for two species: H. dujardini, spanning about 100 million bases[5,6] and R. varieornatus, about 55 million bases[6,7] Using these genomes, we have identified genes involved in anhydrobiosis, and started to explore the biochemistry and physiology of life without water and tolerance to radiation[7]. We have also used the DNA sequences to explore the evolutionary history of tardigrades and unexpectedly found strong evidence that they are more closely related to the legless nematodes than they are to arthropods[6]. 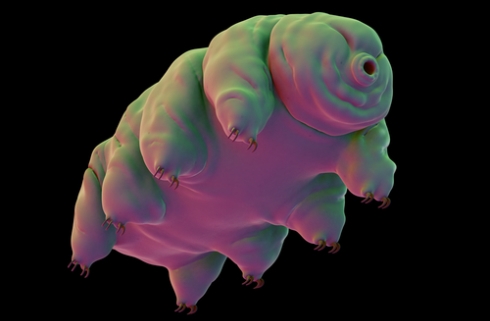 However, we were not the first to publish a tardigrade genome. An estimate of the H. dujardini genome was published by scientists in the US in 2015 to great fanfare[8]. The genome was predicted to be large (more than 200 million bases) and included 18% of DNA and genes derived from non-animal sources. These bacteria- and fungus-like genes were proposed to be a real part of the tardigrade genome, acquired through a process of horizontal gene transfer. This finding challenged models of how life evolves, suggesting the tree of life is more like a net and that animals can acquire new phenotypes wholesale by borrowing genes from other species.

Using blobology, we showed that the inflated genome size and apparent extensive horizontal gene transfer was simply a product of not realising that the original DNA sample was contaminated[3,5]. Indeed, the published 'tardigrade' genome contained complete sequences of a number of interesting bacteria[9].

The original, extraordinary claim and the subsequent debunking got a lot of publicity in the popular and scientific press, and the debate even got its own Twitter hashtag: #tardigate. A few real horizontal transfers remain, but horizontally transferred genes are less common in animal genomes than in bacterial ones. The tardigrade science community has now settled down to striving to understand the biology and evolution of these lovely animals.

And so back to Star Trek: Discovery, in which a fantastic symbiosis between fungi and tardigrades underpins the ability of humankind (and of other sentient aliens) to travel through subspace faster than light. Drawing from the memes of the rhizosphere network in forests and the invincibility of tardigrades, the series foregrounds giant tardigrades as essential to the Star Trek universe.

However, the scriptwriters also read the excited reports on the original publication of the contaminated genome. They did not see the #tardigate storm or the several papers definitively identifying the vast majority of the horizontal gene transfers as simple contamination. So the giant tardigrades in Star Trek owe their amazing symbiotic abilities to their ability to take genes up from other species "just like their counterparts on Earth".

Oops. Well, not really. Star Trek's script writers bent another bit of science truth and managed to get a big version of everyone's favourite minibeast into millions of homes. We like it that all those people know about tardigrades now, but it would also be good if they heard the real science behind the story, because the truth is just as amazing as fiction.

From novels to the silver screen
Tardigrades have had rare but entertaining walk-on parts in a series of science fiction and fantasy novels and films. Sometimes they are monsters.
In The Sentients of Orion books by Marianne de Pierres, the tardigrades, an invading species called the Saqr, are huge, genetically engineered predators that are shipped through space to invade an innocent planet and suck out the brains of their victims using their super-sharp stylets. In the film Harbinger Down, tardigrades sent into space by the Russians during the Cold War are recovered from a crashed space probe in 2015 by an isolated fishing boat crew. Unfortunately, they have mutated into intelligent shapeshifters and proceed to kill most of the humans.
Not all sci-fi tardigrades are on the side of evil, though. In Christopher Tozier's Olivia Brophie trilogy they are again giant but gentle magical creatures that live in an underground world below Florida.

Kazuharu Arakawa is associate professor in the Faculty of Environment and Information Studies, Keio University, Japan.

Mark Blaxter FRSB is professor of evolutionary genomics at the Institute of Evolutionary Biology, University of Edinburgh.