Rodents infected with the protozoan Toxoplasma gondii are less fearful of cats, making it easier for the parasite to propagate. Victoria Jeffers considers what this might mean for the third of the world's human population thought to carry the parasite

When most of us think about parasites, discomforting images of worms, illness and decay fill our minds. However, parasites ultimately depend on their host for survival and to promote their next generation, so the most successful parasites do not cause any perceptible symptoms: you live your life completely unaware of their presence. However, could our little hitchhikers be tinkering with our brains and behaviour to suit their life cycle?

Numerous parasites hijack host biology to reproduce themselves and transmit to new hosts. Emerging evidence suggests the protozoan parasite Toxoplasma gondii is an expert at pulling the strings in the rodent brain to suit its own needs. Infecting an estimated one third of the world's human population on every continent, T. gondii is arguably the most successful protozoan parasite on Earth.

The parasite can only undergo sexual reproduction in the cat intestine, where the parasite forms zygote-containing cysts, called oocysts, which are shed in cat faeces (see diagram, below). These oocysts have a thick cyst wall, which enables them to survive in water or soil for many years, waiting to infect the next host.

T. gondii is an obligate intracellular parasite, which means it cannot replicate without invading and establishing its own niche in a host cell, and it must infect an animal (including humans) to multiply. Any warm-blooded animal that ingests a single oocyst can become infected. The thick oocyst wall is dissolved in stomach acid, releasing the parasites that will then infect many different organs and tissues. 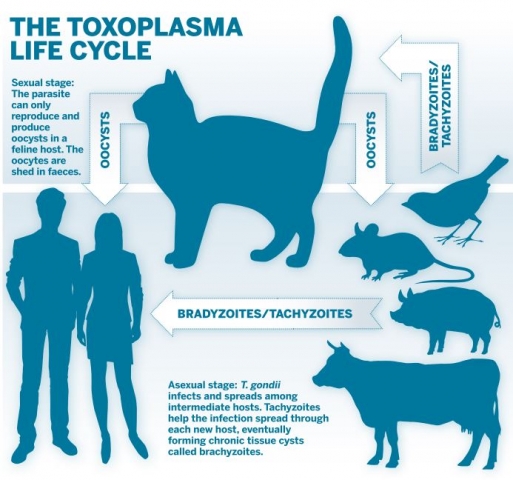 The three infectious stages of T.gondii: tachyzoites, bradyzoites, and oocysts.

During the infection stage of the life cycle, forms of the parasite known as tachyzoites replicate and spread rapidly throughout the body. The tachyzoites respond to the assault from the immune response by forming a tissue cyst filled with bradyzoites (although the situation in immunocompromised or pregnant women can be different – see 'T.gondii in humans'). This is the chronic stage of the parasite's life cycle. The cysts are surrounded by a thick wall made of proteins and sugars that shields the parasites from the host immune response.

Ideally, the parasite would like to make it back to the cat to complete its sexual stage by reproducing with another T. gondii parasite to create a new generation of oocysts[1]. If the host dies, T. gondii is at risk of dying with it; the parasite would prefer its host to be eaten by a cat so it can sexually reproduce. The problem for T. gondii is that animals often eaten by cats – such as rodents – have a strong, innate fear of their feline predators.

Remarkably, mice and rats carrying a chronic T. gondii infection no longer fear the smell of cats and may actually be attracted to their scent[2]. This incredible change in behaviour is also associated with hyperactivity and an increase in risk-taking behaviour, such as scurrying around in open spaces. Understandably, this combination of behaviours greatly increases the chance that the infected mouse or rat will be consumed by a cat, giving T. gondii a ticket to the cat intestine and the next stage in its life cycle. 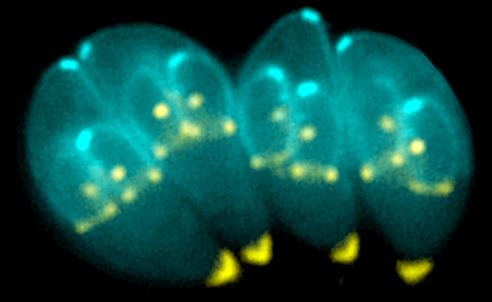 It is still a mystery exactly how T. gondii infection alters rodent host behaviour. Once the parasite invades a cell, it injects some of its own proteins inside, possibly interfering with normal host responses[3]. This helps it evade the host immune system as it multiplies and consumes nutrients. The parasite can also inject proteins into brain cells that it doesn't infect[4]. It is possible that some of these proteins interfere with brain chemistry and alter the behaviour of its host, but scientists have not yet identified any proteins from T. gondii that could have this effect.

Studies of infected rodent brains have found that the size and shape of dendrites on the neurons is altered after infection[5]. The dendrites are important for proper neuronal functions, so these structural changes could be partly responsible for the changes in behaviour.

Chronically infected animals also have chemical imbalances in neurotransmitter and hormone levels that could explain the differences in behaviour. Testosterone levels increase in male rats during chronic infection, which could contribute to the increase in risk-aversion behaviour[6]. Female animals also display behavioural alterations, but their testosterone levels remain stable, indicating that the parasite infection probably affects many different pathways in its host[7].

The parasite might directly manipulate dopamine levels for its own benefit, since parasites replicate faster when dopamine is added to T. gondii cultures in the laboratory[9]. Levels of other neurotransmitters such as serotonin and glutamate are also elevated in chronically infected animals[10]. Norepinephrine (noradrenaline) is an important regulator of the 'fight or flight' response and is decreased during chronic infection, so this may also have a big impact on the rodent response to cat odours[10].

Some of the effects on the brain during chronic toxoplasmosis may also be partially explained by the immune response to the parasite infection. Although the bradyzoite cysts are generally considered dormant, there is probably an ongoing, low-level immune response that causes inflammation in the brain. Neuroinflammation and the presence of inflammatory molecules could also alter neuronal function or interrupt normal neural signalling to affect behaviour.

All of these effects on rodent behaviour could be directly caused by an arsenal of parasite proteins that each affect different hormonal and neurological processes. However, T. gondii might commandeer more fundamental mechanisms to adapt its host's biology. One of the processes by which cells regulate gene expression is by altering DNA methylation. The levels of DNA methylation on a particular gene will dictate the extent to which it is expressed. While studying toxoplasmosis in male rats, scientists found that DNA methylation is decreased on at least one gene in the amygdala, the part of the brain that controls the 'fight or flight' response[11]. The gene that was identified encodes a protein called arginine vasopressin, which is another hormone that contributes to behavioural responses. Decreasing the DNA methylation on this gene leads to increased levels of arginine vasopression production in the amygdala, and is certain to impact behaviour in some way.

It must be emphasised that these are changes observed in mice and rats that have been experimentally infected in the laboratory. They do not necessarily correlate directly with human infection. However, approximately a third of the world's human population are also carrying this infection in their brains. So the question of whether this parasite is also associated with altered behaviour in people is an important one.

Humans can become infected by drinking water or eating foods contaminated with oocysts, often vegetables that have not been washed properly.

Another common route of transmission to humans is by eating undercooked meat, particularly pork and lamb, from infected animals. The initial infection is relatively short and mild, and most people don't notice.

Human behaviour is much more complex than that of mice or rats, so it is difficult to directly link T. gondii infection with a specific effect in humans. Any evidence for effects on human behaviour comes from correlative studies. Some of these have reported an association between chronic toxoplasmosis and mental health conditions such as schizophrenia and bipolar disorder[11]. These conditions are due to a combination of many factors, so T. gondii cannot be directly implicated. However, it is feasible that the infection might trigger a response in somebody already genetically predisposed to a mental health disorder. Chronic infection has also been associated with impulsive and risky behaviour. Studies have found higher incidence of T. gondii in people involved in car crashes, as well as among suicide victims[12]. There is also some evidence that chronic T. gondii infection could negatively affect coordination and response times, as well as memory formation.

The full extent of the impact of T. gondii on human behaviour has yet to be evaluated. The widespread incidence of the infection in humans makes it critical to understand more about how this infection affects human behaviour and neurobiology. Despite how common this infection is in humans, there is still no treatment available that eliminates the T. gondii tissue cysts. It is unclear whether any effects on host behaviour are reversible, and if complete elimination would restore original brain biology. Ongoing research is trying to understand how chronic infection changes the brain and how these changes might alter behaviour or facilitate mental health disorders.

T. gondii in humans
T. gondii becomes a concern when an infected person becomes immunocompromised – for example, due to AIDS, organ transplant or chemotherapy. When the immune system is suppressed, bradyzoites can turn back into tachyzoites and start multiplying rapidly, causing tissue destruction, organ failure and, if left untreated, death.
If a woman becomes infected with T. gondii for the first time during a pregnancy, the parasites are able to cross the placenta and infect the foetus, potentially causing developmental harm or even miscarriage.

Victoria Jeffers is an assistant research professor at the Department of Pharmacology and Toxicology at Indiana University School of Medicine. She is interested in how T. gondii uses epigenetic regulation to hijack host biology and behaviour. Twitter: @jeffersvic