Above: Bdellovibrio, with long flagella, attached to a larger prey bacterium, by Dr Carey Lambert (University of Nottingham)

Tom Ireland speaks to microbiologist Liz Sockett about the bacteria that prey on human pathogens, and how they could be used to fight hard-to-treat infections

Professor Liz Sockett is a microbiologist at the University of Nottingham who studies the predatory bacteria Bdellovibrio bacteriovorus (BvB) and its potential use as a ‘living antibiotic’. These remarkable organisms chase other bacteria before puncturing a hole in their prey and forcing themselves in. They then consume the bacteria from the inside, turning the cell contents into long filaments of more Bdellovibrio.

Sockett and her colleagues were recently asked by the US’s Defense Advanced Research Projects Agency (DARPA) to answer key questions on the suitability of BvB as a therapy for treatment-resistant infections. The bacteria is harmless to humans, ubiquitous in the environment and will attack all of the gram-negative bacteria on the World Health Organization’s list of pathogens that urgently require new treatments.

Viruses that attack bacteria are often in the news and phage therapy is increasingly well studied. However, we rarely hear about the bacteria that attack other bacteria and how we could use them to fight treatment-resistant pathogens. Why is that?

Using live bacteria to treat a bacterial infection doesn’t sound like the greatest thing in the world, right? When you add a phage [to an infected patient], you’re not adding more of a related cell type. And drugs and phages are very small, so they can circulate round the body, whereas bacteria can’t.

There are around 12 laboratories globally that work on predatory bacteria and two other consortia that worked on the DARPA programme (see 'DARPA vs disease', below) aside from us.

There are around 3,500 genes in Bdellovibrio, whereas in a phage there might be 40 or 50 genes coding for all their functions. Lots of people have made really great functional discoveries in phage work, but it has been a larger undertaking to drill down to function in predatory bacteria.

What makes BvB such an effective predator?

It is very small and can glide on surfaces and swim quickly in liquid, so it can collide with bacteria. But it also has chemotaxis apparatus that enables it to sense prey-rich regions and move into areas where bacteria congregate. They effectively blend with the outer membrane of their prey, then build a molecular porthole in the cell wall and cut a hole in the wall in the middle of this reinforced ring. From that, they are able to enter.

Then they start to secrete a range of enzymes to break down the cell’s inner components. Sequentially they break down different molecules, taking up the monomers and building more of themselves. To leave, they have to cut themselves out because they have sealed themselves in. It’s an amazing process which we are exploring with Dr Andrew Lovering at University of Birmingham.

There are lots of different types of predatory bacteria, but in terms of fully invading and sealing themselves in, BvB are quite unusual. Microvibrio or Bdellovibrio exovorus attack from the outside, but for Bdellovibrio bacteriovorus, their prey is both food and a home.

How do they avoid ingesting themselves?

They live in the outer compartment of the bacteria’s two membranes, known as the periplasm. That is why they only attack gram-negative bacteria, which have that extra outer membrane. They are not effective against MRSA, which does not have it, but attack all the other major pathogens that the WHO is worried about. 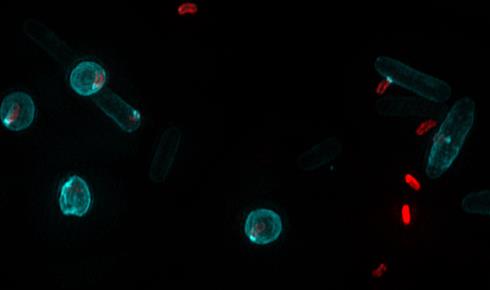 Bdellovibrio cells (red) on the right of this image can be seen forming portholes in cylindrical bacterial cells, while those on the left have fully invaded their rounded E. coli prey (click image to enlarge). Image courtesy of Liz Sockett's lab at the University of Nottingham.
The way they reproduce sounds almost like a sausage maker…
Yes, the bigger the prey bacteria, the more BvB you will get out. They don’t divide by binary fission, they just make a long filament that grows while food is available and then cuts into the number available from that filament – it’s really such a clever thing.

Bdellovibrio can swim more than 100 times their length per second. Is this rapid movement essential to ‘catching’ their prey?

They need to outpace other bacteria, but they also need to impact quite hard because the last few micrometres are very hard. At this scale, squishing through that last bit of water surrounding the prey is like moving through quick-setting concrete.

When our colleague Carey Lambert knocked out their flagella we found they can still attack as long as you pipette them directly on to the pathogen. So it is just reaching them that requires this energy. On a solid surface they move more slowly and just sort of butt up against [their prey].

What tools do you use to help you understand these tiny organisms?

In terms of genetics, we fluorescently tag the products from the genome and look at when they appear. For example, is it while they are making the porthole? Or are they secreted into the prey? We group the genes into early or late, and then make mutants to test at which step in the process they get stuck. Are they failing to bind? Stuck in the porthole? Or stuck inside when trying to get out?

What’s amazing is that we’ve seen in some knockout mutants that they’ve realised there is an issue and have more than one gene in their genome should one fail. The last thing they wanted to do is get stuck in a half-dead bacteria.

You can also look at other bacteria that invade other bacteria and see what genes they have in common. In terms of microscopy, we have been really helped by a collaboration with Erkin Kuru, then a PhD student at Indiana University. We are able to use very specific amino acid dyes that report changes in the cell wall. We had the whole four-hour predator-prey process laid out and just gave a little pulse of the differently coloured amino acid at different times, just to ask what is changing about walls at different times.

This was fantastic and, combined with super-resolution microscopy, it’s been a really great way of seeing each stage of the process, at least in terms of cell walls. Later we produced a paper in Nature Microbiology with Carey Lambert that shows the process beautifully, with each stage lit up.

Can you watch the predation process in real time?

These bacteria are ultra-tiny – only a quarter of a micron across and only one micron long – so you need really good microscopy. However, we can do movies on conventional microscopes – we usually make the cytoplasm of the BvB and the prey different colours so we can watch them invade. 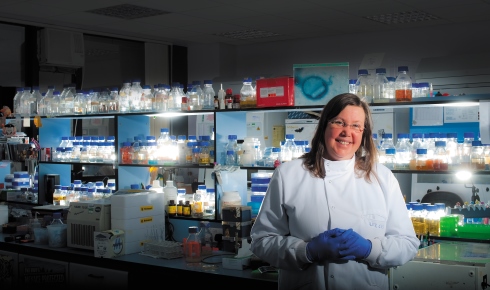 Professor Liz Sockett in the laboratory.

You’ve been studying these bacteria as a way to treat antimicrobial-resistant infections in animal models. What is the next step?

Our latest submission in this area is looking at cultured human cells, e.g macrophages and serum. We’ve also been panning humans for their general antibody levels to Bdellovibrio. We aren’t yet injecting humans with it, but we’re trying to use the host-response information from our animal models to inform safety in mammals and humans. Through the DARPA project, we’ve learned it isn’t a problem to add predatory bacteria to an infected host. I think everybody thought you would just kill the host by making the inflammation even worse. That’s certainly not the case.

How might a Bdellovibrio-based therapy be administered to a patient?

The nature of the infection would be localised and serious, such as an infected wound or ulcer. The bacteria would be injected right into the infection site. Because the body raises antibodies in response to any proteinaceous material you’d only get one chance for that to work before the body starts fighting off the predatory bacteria too. It is a line of defence where we hope you could save someone’s life, possibly in combination with another therapy.

When you stress the pathogen with a predator, the pathogen can undergo changes to try to resist that then leaves them susceptible to other treatments. That’s what’s been seen in some phage therapy such as the acinetobacter story from last year [by Chip Schooley, University of California], where an antimicrobial-resistant pathogen was treated with phages and then became antimicrobial sensitive.

We aren’t yet doing those kinds of trials, but BvB does stress the pathogen and what we’ve shown in the animal models with the zebrafish [with Serge Mostowy’s group at Imperial] is that there is a very fast killing of pathogens inside the living zebrafish. After about four hours, the pathogen numbers drop ridiculously low and it gives the immune system a chance to finish off those that remain.

What do pathogens do to repel an attack by BvB? Could they become resistant?

It’s very difficult to be resistant. The victim can secrete proteinases to damage the Bdellovibrio’s surface, or some of the structures that are binding to the bacterium. Some can make an S-layer, which is like chain mail covering lots of their surface. The rate of invasion drops, but there are still gaps. However, there is nothing simple that they could change and suddenly not be susceptible.

So it’s all good news, then, in terms of developing a potential therapy for treatment-resistant infections?

Yes, and the nice thing is we’ve used drug-resistant pathogens from the NHS in our studies, so it has a real benefit in terms of hopefully helping treat infections that have been hard to cure and are circulating in the UK.

DARPA v DISEASE
In 2014 the US’s Defense Advanced Research Projects Agency (DARPA) launched its Pathogen Predators program, which set out to demonstrate that live predatory bacteria might be able to effectively treat Gram-negative antibiotic-resistant infections. The program funded research aiming to answer fundamental questions about bacterial predators such as Bdellovibrio bacteriovorus and Micavibrio aeruginosavorus. These are:
-Against what pathogens are predatory bacteria effective?
-Are predators toxic to recipient host organisms?
-Can pathogens develop resistance to predation?
-Can mathematical modelling be used to quantify predator-prey relationships?
Liz’s lab at the University of Nottingham received funding as part of the program and will soon be reporting on several years of this vital research. Jess Tyson, programme manager for the lab’s DARPA program, says it has been a completely new way of working that has led to a huge amount of progress in this field.
“It’s less like we’ve written a grant on what we want to do, more like DARPA has set us a set of challenges and we report monthly on our approach to answering them. That monthly reporting is unusual for a grant, but the biggest benefit has been the enormous amount of work you can get done in a short time.
“DARPA clearly define that these are the milestones and headline targets you want to achieve. It kinds of clarifies your mind but you have the freedom to do it the way that works best. We’d have never done this amount of work and never found out so much working in a non-directed way.” 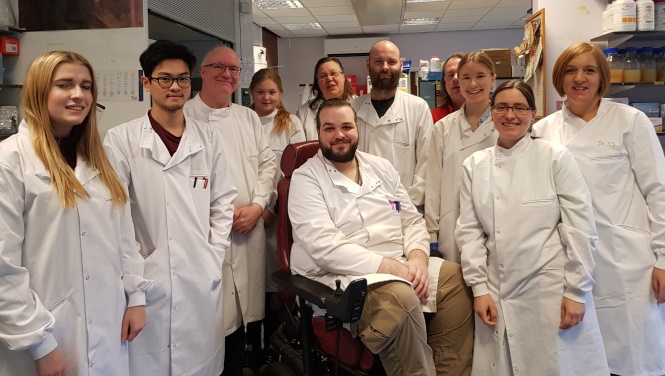 Some of the research in article was funded by the U.S. Army Research Office and the Defense Advanced Research Projects Agency accomplished under Cooperative Agreement Number W911NF-15-2-0028. The views and conclusions contained in this document are those of the authors and should not be interpreted as representing the official policies, either expressed or implied, of the Army Research Office, DARPA, or the U.S. Government. The U.S. Government is authorized to reproduce and distribute reprints for Government purposes not withstanding any copyright notation hereon.