Researchers are slowly deciphering the meaning of chimpanzee, bonobo and other ape gestures. Kirsty E Graham explains how some of these signals are common to all species, including us

There is a well-known linguistic thought experiment in which a researcher goes to another country and a rabbit hops in front of her. A citizen of that country gestures at the rabbit and says “gavagai”. The researcher doesn’t speak this language and needs to work out what gavagai means. Does it mean “Grab the rabbit, it’s good to eat!”? “Hands off, that’s my rabbit!”? “Run, rabbits are dangerous!”? The researcher needs to encounter more people in more contexts with more reactions in order to piece together what the word gavagai truly means.

This thought experiment is also a useful way to think about deciphering the communication of other species. I study bonobos, chimpanzees and macaques – none of which can answer me if I ask them: “What does that gesture mean?” In order to decipher the meanings behind their gestures (or their vocalisations and facial expressions for that matter) I must look at the accompanying contexts and behaviour.

There are two main approaches that can be taken to understanding non-human communication. First, we can look at the context at the time of signalling – for example, what was happening around the signaller, what were they doing, what was in their environment? Second, we can look at the behaviour that the signal itself elicits in the individual(s) it is directed towards.

In the vast literature on primate alarm calls, stemming from Seyfarth, Cheney and Marler’s landmark paper on vervet monkeys published 40 years ago next year[1], researchers often combine these two approaches, looking at what predator types elicit the alarm calls and how individuals respond to certain alarm calls.

Surprisingly, however, up until recently the literature on gestural communication seemed to focus almost exclusively on the context in which gestures occurred, glossing over the need to look at behavioural responses.

The study of great ape gestures was kicked off by the work of Jane Goodall and Frans Plooij[2], who first noticed the ways that chimpanzees in the wild seemed to be using their body movements to communicate. They observed that the gestures were used across different contexts, a finding that has since been supported by research from Tomasello and Call[3] among others.

For a long time the contexts in which the gestures occurred were used as a kind of proxy for meaning – gesture X is used in play, gesture Y is used in grooming and travelling and so on. It’s pretty clear, however, that within a context you might want to achieve different things – you might want to start playing, stop playing, switch roles, tell the other to move away. While context gives useful information for how gestures are used, it is not the whole story.

Meanings for chimpanzee gestures were first catalogued by Hobaiter and Byrne at the University of St Andrews[4], building on previous work by Byrne and colleagues. The group looked at a gesture’s “apparently satisfactory outcome” – that is, how the recipient reacted after the gesture and whether this reaction satisfied the signaller (shown by cessation of gesturing). This approach is a fine-tuning of the way researchers used to look at outcomes, with the added layer of assessing whether the outcome was the one the signaller had desired.

Working with Byrne and Hobaiter, I took this approach and applied it to bonobo gestures. I conducted 12 months of fieldwork at Wamba, Democratic Republic of the Congo, studying two groups of wild bonobos. I filmed as much social behaviour as I could and by the time I had finished video coding I had 4,256 instances of gestures.

A large dataset is imperative for studying gestures. The more detailed your questions are, the more gestures you need and the longer your fieldwork must be. The gestures fell into a repertoire of 68 gesture types, with a ~90% overlap with the chimpanzee gestural repertoire[5]. That’s quite a staggering overlap for two species separated by roughly one million years of evolution and we have argued that this points towards a biological component to great ape gestural communication[6]. 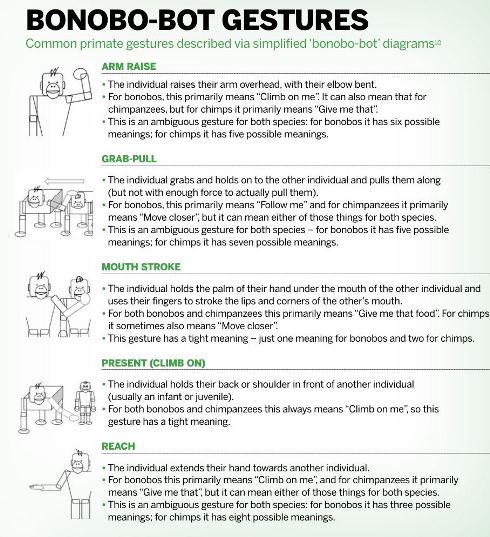 So what exactly are bonobos communicating about? Gestures are used socially, directed from one individual to another, and so they are used to request and negotiate social goals. Bonobos gesture to initiate play, request food, solicit sex and genito-genital rubbing (female-female sexual behaviour), tell others to move closer or further away or change position, and to start grooming. Infants gesture to mothers to be picked up, and mothers (and occasionally helpful adolescents or the odd adult male) gesture to infants to climb on their back.

Of the 33 bonobo gesture types for which we had enough examples to determine meanings, half had one single meaning – that is, were used exclusively for one apparently satisfactory outcome – and half had multiple meanings, being used for a variety of apparently satisfactory outcomes. It’s a mystery how bonobos are able to interpret these seemingly ambiguous gestures, but we think that context might have something to do with it[8]. 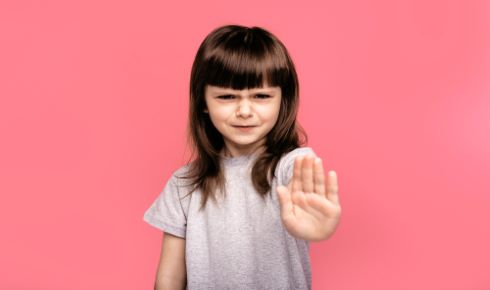 Although human gestures are harder to study, researchers have found that the gestural repertoire of one- to two-year-old infants overlaps with the chimpanzee repertoire by around 90%.

Humans are great apes too, and given the overlap in bonobo and chimpanzee gestural communication and its apparent biological component, it would not be surprising if we had retained some of these gestures as well. The challenge with studying so-called ‘natural’ gestures in humans is that we learn a lot of conventionalised gestures (waving, head-nodding and so on) and we also deploy co-speech and co-sign gestures. Teasing these additional gestures apart from any underlying great ape gestures is a difficult task, but an important one. We are gradually building a picture of the overlap of great ape gestures, but humans are a missing piece in the puzzle.

The problem of human gestures requires creative solutions and if the issue of observing gestures in humans is that we learn too many new ones, then one approach is to look at small children before they have had a chance to learn too many.

Recently, researchers found that the gestural repertoire of one- to two-year-old infants overlaps with the chimpanzee repertoire by at least 89%[9]. This is research and needs to be scaled up to include more individuals across more cultures. Nevertheless, it is exciting to see new creative ways of examining gestures in humans, and I look forward to further experiments and observations that can help to answer these fundamental questions.

Studying great ape gestures has the potential to provide insight into the evolution of human language, but it is also fascinating in its own right, figuring out how another species communicates and what is meaningful to them.

As well as expanding the study of great ape gestures to include humans, it would be wonderful to look at other primate species and beyond. We currently have a very patchy view of the types of gestures that other species deploy and the ways in which they deploy them. I would love to see the use of apparently satisfactory outcomes applied across a huge number of species and types of communication. We are only just starting to scratch the surface of how other species communicate and I firmly believe that the best way to think about it is to ask: “What is meaningful for them?”

Kirsty E Graham is a research associate at the University of York, working with Katie Slocombe on an ERC-funded project looking at joint attention in humans, chimpanzees and Sulawesi crested macaques. Her PhD research on the gestural communication of wild bonobos was supervised by Richard Byrne at the University of St Andrews