Soaking up the Pressure

Deep below the polar ice, centuries-old sponges capture carbon and support an enormous variety of marine life. These mysterious animals are flexible enough to thrive in this changeable environment, but can they survive the extensive changes expected from climate change and human activity?

Individual polar deep-water sponges can live for hundreds to possibly thousands of years and become important semi-permanent structures supporting tens of thousands of animals on the seafloor[1]. They and their microbiomes are recognised as key organisms in ocean nutrient cycling, and this ‘sponge loop’ of nutrient processing can make a substantial contribution to maintaining the resilience and resistance of seafloor communities.

Sponges also filter organic matter, which is fed on by other animals or assimilated into carbon that is locked away for long periods in sponge tissue. This ‘blue carbon’ ecosystem service performed by polar deep-water sponges is not yet fully recognised, but could be an important negative feedback to rising carbon dioxide levels[2].

Polar environments are likely to hold more than 10% of the world’s sponge species, with up to half of them endemic to polar environments[3]. These areas of ocean were once believed to be protected from human impacts, due to their remoteness, vast depths, and heavily ice-laden land and seas. Yet they now face significant threats from climate change and human activity.

Short-term disturbances from iceberg scouring, and longer-term changes in sea level, temperature, and the waxing and waning of ice sheets and ice shelves are a feature of shallower sectors of polar deep-sea regions. But the cryosphere is changing rapidly: just within the last 30 years the polar oceans have warmed steadily and climate models predict more rapid changes in the near future[2].

Sea surface temperatures in the Arctic are among the most rapidly rising of anywhere on Earth, leading to greening, melting, and eroding of permafrost and tundra in the Arctic region, as well as sea-ice loss. Southern polar warming has led to ice-shelf collapse, glacier retreat and loss of sea ice, causing increased iceberg scouring, sedimentation and rising sea levels. Warming waters and increased eutrophication (excessive richness of nutrients in a body of water) has led to ocean stratification and seafloor deoxygenation in several regions, which means less food and oxygen reaching seafloor animals. Deoxygenation is predicted to increase in future years. 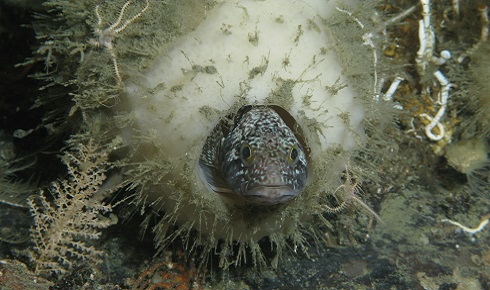 As the human population grows, remote sections of the oceans, such as the poles, high seas and deep waters, are likely to be threatened by the increased demand for resources[4,5]. Such threats include commercial fishing of poleward-moving species, deep-sea mining of precious metals, and oil and gas exploration in areas once covered in sea- and land-ice. Bioprospecting of sponges and corals for new pharmaceutical drugs could become an additional threat.

Other potential impacts include the exploration of ocean carbon sequestration projects around basaltic rock regions of Iceland and Greenland; the opening up of transshipping routes across the Arctic Ocean; and the impacts of our pollution, such as plastic waste, contaminated run-off from Arctic rivers, and increasing fuel spills from both industry and tourism. Assessing our knowledge of sponge vulnerability against predicted threats could aid our determination of how at risk polar sponges are.

Compared with coral reefs, sponge grounds are thought to be more resilient to future changes in the ocean environment[5]. Shallow, tropical sponges were found to be less sensitive to the combined stress of increased temperature and pH, giving them the status of seafloor ‘winners’ in assessments of global change and leading to predictions that coral reefs will shift to sponge reefs in the tropics.

Polar deep-sea sponges have a number of ‘flexible’ characteristics, including a degree of plasticity in their metabolism, diet and reproduction. They can also settle, grow and defend themselves in new and challenging environments. Having evolved in regions that are subject to extreme changes in productivity and physical disturbance, polar and deep-sea sponges may be capable of responding flexibly to future stressors. 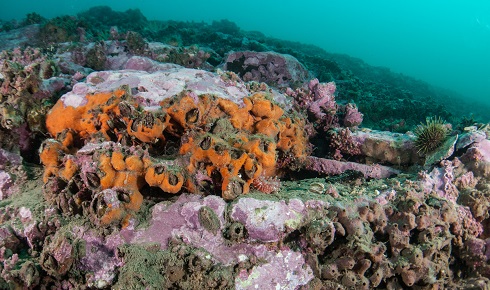 An assembly of deep-sea sponges, some can colonise both hard and muddy substrates (image courtesy of Piotr Kuklinski)

Each sponge contains a stable, flexible and diverse microbiome that increases their resilience and resistance to disturbance, and contributes to their nutrition, defence, immunity and development. In the rapidly warming West Antarctic Peninsula several species were found to have distinct but stable bacterial microbiomes despite large temperature changes recorded over the two-year experimental period.

Sponges are filter-feeders, consuming a broad range of bacteria and organic matter. One family has evolved carnivory, passively trapping small crustaceans. Filter-feeding sponges select high-energy food, but can adapt their preferences. In a future ocean with fluctuating productivity, switching food sources could be key to survival – for example, recent ice changes in the Ross and Weddell seas are hypothesised to have caused productivity changes that enabled a rapid recruitment and growth of glass sponges.

Hermaphroditism is common in sponges, with individuals either being both sex or changing sex throughout life. Reproductive mechanisms are varied, with sexual and asexual reproduction common strategies. Different reproductive modes and dispersal capabilities could improve a sponge’s ability to shift ranges quickly to areas where threats are reduced.

Glacier retreat and ice-shelf collapse has led to increasing polar seabed availability, and in these new environments sponges have recruited and grown rapidly. Sponges are flexible substrate users – that is, they often possess root tufts, which enables them to colonise muddy environments as well as hard surfaces. Without root tufts, sponges grow on drop stones in deep waters that have been deposited from drifting icebergs and are known to be oases of polar deep-sea diversity. Increased iceberg production is anticipated in the future, which means there could be more deep-sea substrate available to competitive, eurybathic sponge species (capable of living on the bottom of both deep and shallow water).

Finally, Sponges are adept at regeneration, which is important for recovering from physical disturbance, predation or disease. Rapid regeneration means that sponges can re-establish their competitive size and shape, reattach to substrate, prevent further disease and limit other animals taking their feeding space. Sponges that break easily tend to recover more quickly.

A number of characteristics make sponges vulnerable, however. The main one is that they are fragile-bodied. Without protection, long-line fisheries could destroy deep-sea sponge grounds rapidly. While the physical impacts of deep-sea mining, industrial ocean carbon sequestration and oil and gas exploration are not well understood at present, they could be additional threats. 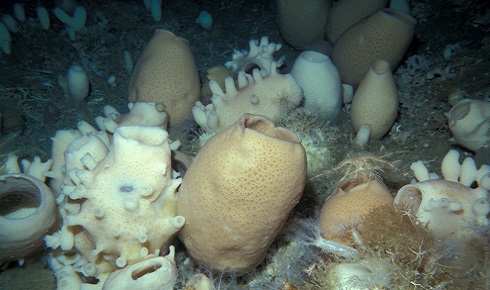 Deep-sea polar sponges were once thought to be protected from human impacts, but they now face significant threats (image courtesy of Julian Gutt)

Warming is predicted to increase iceberg scouring on shallow polar seabeds, too. Iceberg scouring physically removes some seabed organisms, creating space for others to occupy, but it could reduce diversity, impacting key sponge grounds.

Sediment loads in the polar deep-sea are very low, so filter-feeding sponges, especially glass sponges, are unlikely to be adapted to high levels of sedimentation. Removing sediment from a sponge’s body is an energy-intense process, involving mucus production and shutting down of the filtering areas. In the future, sedimentation rates could increase in polar regions, caused by accelerated erosion and river and glacier run-off. Mining and oil and gas extraction could also increase sedimentation rates.

Falling pH levels and oxygen are likely to affect sponges. Sponges generally need little oxygen to thrive, potentially due to their evolution during a time of minimal oxygen production. Today, however, polar deep-water areas tend to be oxygen rich and sponges in these regions could have adapted to these high-oxygen conditions. Sponges can alter their pumping rates and close their oscula (excretory holes) if little oxygen is available, but this is a short-term survival strategy. In the deep Northeast Pacific, hypoxic events have increased sponge mortality rates, particularly in glass sponges. A high proportion of polar sponge endemics create calcified skeletons and are likely to be vulnerable to changes in pH.

It is hypothesised that deep-sea species are likely to be specialists with narrow tolerances. These could be at greater risk of extinction than those with broader ranges adapted to more variable environments. In the Southern Ocean, nearly 40% of sponges have narrow latitudinal ranges, two-thirds have restricted longitudinal ranges and three-quarters have restricted depth ranges. With predictions for warming water and increased human disturbance in polar regions, range-restricted species could find their key habitats further narrowed, leaving them vulnerable to extinction. 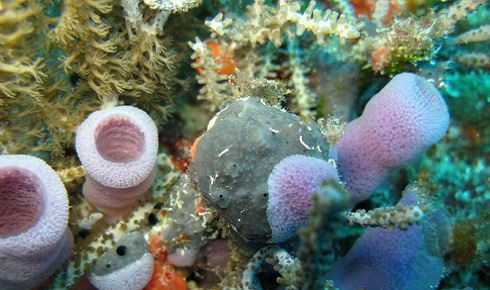 In the Southern Ocean, less than 5% of the seafloor is protected by Marine Protected Areas (MPAs)[1] and there are 42 smaller Vulnerable Marine Ecosystem areas in which fishing is fully prohibited. In the sub-Antarctic, each island has different levels of protection, dependent on national schemes – for example, in South Georgia and the South Sandwich Islands, 23% of their MPA is designated a no-take zone.

How sponges are defined as indicators of vulnerable habitats varies. There is no protection of sponge grounds in the sub-polar Bering Sea, whereas in the polar and sub-polar region, factors such as bycatch weights, sponge size and whether demosponges or glass sponges are present determine if an area should be protected from fishing activities.

In the Arctic, less than 5% of the marine environment is protected from fishing[1]. High seas make up a large proportion of these regions, both in the central Arctic Ocean and in the vast seafloor between sub-Antarctic islands. In both areas seafloor protection is limited and the framework for this protection will need to adapt to enable enhanced safeguarding of unique communities against future threats. A global focus on understanding ocean health and threats is overdue, with the UN declaring a Decade of Ocean Science for Sustainable Development from 2021.

Deep-water sponge grounds are integral parts of the polar seafloor, maintaining the structure and function of communities, and are key players in seafloor nutrient cycling. Better protection of polar sponge grounds from human disturbance will improve their resilience to anticipated climatic changes and that of the communities they support. Deep polar sponge grounds could be important in ‘blue carbon’ assimilation, so keeping them healthy is a global reason for us to strengthen their protection.

This article appears in the Feb/March issue of The Biologist (67.1)

Rachel Downey is a PhD student at the Australian National University researching threats to polar sponges. She is a taxonomic editor of Southern Ocean sponges for the World Register of Marine Species and a team member of Antarctic Seabed Carbon Capture Change.