Amid the current crisis it’s easy to forget that in 2018 the UN Intergovernmental Panel on Climate Change warned that we have just 12 years to limit the effects of climate change to avert a global catastrophe. No surprise then that the world of research is flush with projects aimed at lowering our collective carbon footprint, be it by improving compostable materials, finding greener fuel sources or reducing the heat requirements of chemical processes.

One area that has gained interest from scientists and politicians alike is solar energy generation. The idea of harnessing the sun’s power for energy is not new and applications ranging from solar-powered calculators to large-scale solar farms have been around for many years. However, the widely hailed ‘fuel of the future’ still faces pitfalls due to its high cost and low efficiency.

A traditional silicon-based solar cell works on a principle similar to photosynthetic light-harvesting complexes: sunlight triggers electron transfer between carriers in a membrane, with electrons eventually reaching a connected anode and passing around an electrical circuit. Current can either be stored and used as electricity, or can drive other attached components such as sensors or fuel cells.

One of the key factors determining the energy efficiency of a solar cell is its quantum yield, here defined as the proportion of photons absorbed by the system that go on to generate current in the attached circuit. Natural photosynthetic complexes are extraordinarily efficient at charge separation, with a quantum yield close to 100%. Unfortunately, the same cannot be said for silicon solar cells – separated charges often recombine within the membrane, with electrons never being transferred to the anode.

The high quantum yield of photosynthetic complexes has been achieved through a careful energetic balancing act, optimised over billions of years of evolution. Artificial systems cannot hope to compete with that: our best hope in improving solar cell efficiency is to try to incorporate photosynthesis into our technology. This realisation has led to a growing interest over the last decade in how we can use biological structures in solar cells and devices to harness the power of photosynthesis directly. 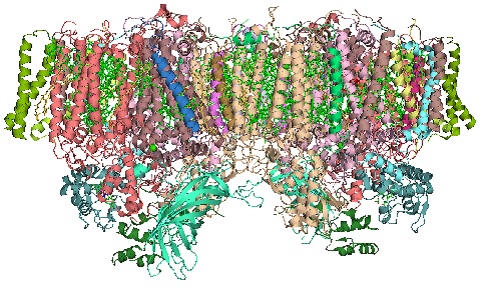 Photosystem II – unstable and difficult to work with

The main way of doing this is by using photosynthetic complexes (several proteins and pigments that together execute the primary energy conversion reactions of photosynthesis) to capture light in solar cells. Some research groups do this by mass producing and isolating light-harvesting complexes or photosystems, while other approaches incorporate the entire thylakoid membrane where these complexes are located[1].

Both methods have their benefits and drawbacks. “It can be easier to control the way that the system interacts with manmade materials using isolated proteins rather than using membranes,” says Dr Mike Jones, a researcher whose laboratory at the University of Bristol studies these complex photoreaction centres. However, to maintain protein stability outside of membranes, lab groups such as Jones’s must use expensive detergents such as dodecyl maltoside. Conserving complexes within plant or bacterial membranes enhances protein stability and removes this extra cost, but can lead to interference from other membrane protein complexes.

The setup of these biological molecules within solar cells can also vary. In some cases photosynthetic light-harvesting complexes (LHCs) are used as dyes in dye-sensitised solar cells, with the complexes attached to anodes via a semiconductor such as titanium dioxide. Photon absorption by the complex initiates the transfer of electrons to the anode via the semiconductor and these electrons move around the circuit to the connected cathode, generating current. At the cathode, electrons are collected to re-reduce photosynthetic complexes for further photon absorption[2,3].

Other research groups use biohybrid approaches, with LHCs and photosystems attached to electrodes directly or via an intermediate. Here, the entire charge separation process of the solar cell takes place within biological complexes, before final electron transfer to the anode. Biohybrid approaches often rely heavily on natural components, with biological molecules such as quinones linking photosynthetic complexes to the anode.

There has been much debate within the field as to which photosystems are best suited to this work. The frontrunners so far are plant or cyanobacterial Photosystem I, and purple photosynthetic reaction centres from bacteria such as Rhodobacter sphaeroides. Some research groups are also using plant Photosystem II, but this complex is generally less popular because its instability makes it difficult to work with. 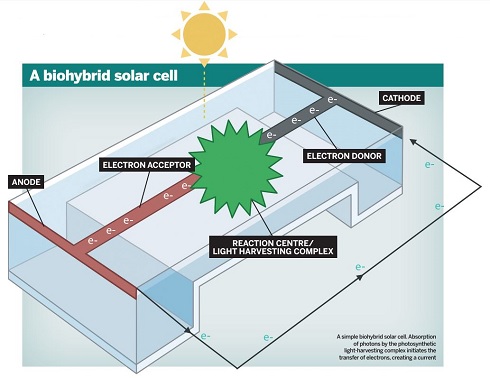 A simple biohybrid solar cell. Absorption of photons by the photosynthetic
light-harvesting complex initiates the transfer of electrons, creating a current.

Indeed, stability is the major challenge associated with using photosynthetic complexes in artificial systems[2]. Cross-linking complexes to electrode surfaces often requires them to be chemically modified, which must be done with caution to preserve their conformations. Furthermore, once incorporated into solar cells, the constant exposure to high levels of radiation and free radicals, and the absence of the protein repair machinery present in living systems[1], results in photosynthetic apparatus decaying quickly – sometimes only generating current for a matter of days.

Ongoing research is solving the problem of stability, and thereby increasing the longevity of photosynthetic solar cells, in a number of creative ways. Some groups are turning to synthetic biology: promising approaches here include incorporating complexes into hydrogels at the electrode surface. This conveys the advantages of increasing crowding of photosynthetic complexes, leading to better electron transfer and enhanced stability[2].

Other groups are synthesising artificial chlorophyll analogues, which still carry out effective electron transfer, but are more stable than their natural counterparts[1,4]. The disadvantage of this approach is that synthesis can be complex, energy-consuming and expensive.

Another key priority for researchers in the field is to increase the current that can be generated by this machinery. In recent years there have been huge increases in the power output of photosynthetic solar cells. Current generation per cm2 of cell has increased from being on the nanoamp or even picoamp scale when the field started out to around 700 milliamps in the last two or three years – meaning it is now comparable to that of silicon solar cells. Nonetheless, a steadier power output must be attained to allow photosynthesis-based systems to become a real competitor to silicon solar cells. 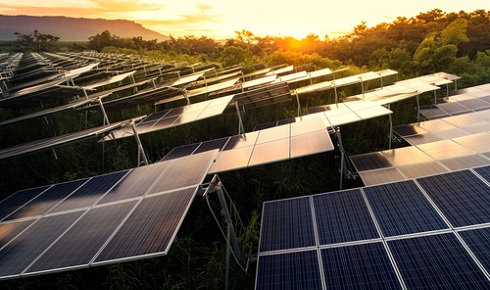 Could incorporating photosynthetic substances into solar cells boost the industry?

One way to achieve this would be to use a wider range of photosynthetic complexes in the machinery. Plant photosynthetic apparatus can only absorb photons with wavelengths of between 380nm and 710nm, which accounts for just 40% of photons reaching the Earth’s surface[1]. On the other hand, purple photosynthetic bacteria absorb photons with wavelengths between about 710nm and 810nm, while cyanobacterial phycocyanin absorbs at wavelengths up to 900nm1. An enticing prospect would be to engineer solar cells containing both plant and bacterial photosynthetic apparatus, allowing a greater proportion of photons to be absorbed and a steadier power output to be achieved.

While photosynthetic solar cells to provide energy for the grid may be a way off, a more immediate application of this technology would be in powering disposable or remote devices such as biosensors. One such application is the use of these devices to detect herbicides such as atrazine in water supplies.

Atrazine has been banned in the EU since 2003, but is still used in dozens of other countries including the US, despite having been linked to a range of health problems in humans and other animals[5]. It kills plants by inhibiting Photosystem II, and similarly inhibits purple photosynthetic reaction centres[5], sparking interest in using these complexes in atrazine-detecting biosensors. The inhibition of photosynthetic machinery by atrazine in the water supply decreases current flowing round the cell, which can be detected by an attached sensor[5].

Photosynthesis-based technologies could have applications in many other areas, says Jones. “One of the best parts of working in the field is that every paper we write has a different application in mind,” he says. Other possibilities so far have included integrating photosynthetic apparatus into UV detectors and into glucose biosensors for diabetic monitoring of blood sugar levels.

Although there is still much work to be done to ensure the stability and longevity of photosynthetic solar cells and biodevices, the rapid rate at which progress is being made – and the intensity of research in many different areas – hint at a bright future for applied photosynthesis. The release of such machinery would mark a huge step forward for renewable energy, paving the way to cleaner, greener technology and energy production. The use of biological molecules such as cellulose to improve compostability also provides tantalising possibilities in other areas by proving what we can accomplish using the resources that evolution has perfected for us.

Recyclable cells  At present, the instability of photosynthetic complexes in the long term means that cells or environmental biosensors should preferably be compostable. In many cases solar cell electrodes are made from gold, silicon or chemically enhanced glass, which as well as not being biodegradable incur high manufacturing costs. For more environmentally friendly biodevices, researchers are looking into carbon-based electrode or semiconductor materials such as graphene. As well as being cheaper to produce than other electrode materials, graphene is a better conductor of electrical charge and enhances one-way electron flow around the circuit[3]. Graphene itself has a low affinity for proteins, and in an interesting twist on natural photosynthesis researchers are experimenting with organic compounds including cytochromes for the attachment of photosystems to it[6]. Other prospects for cheap, recyclable electrode materials are cellulose and even paper[7], although these are still in the early stages of development.

Annabel Calvert is a biochemistry graduate from the University of Bristol and an aspiring science communicator. Very occasionally, she tweets @CalvertAnnabel