This year has been a strange time for many scientists. So too for Dr Tudor Dawkins FRSB, who has returned to postgraduate research at 64, conducting experiments in his greenhouse at home

Retirement beckons? For some it’s a time to sit back and relax, and do those things you always wanted to do but never seemed to have time for. My retirement came a little prematurely following a stroke, but I was extremely lucky to make a full recovery. I had enjoyed a long career in the agricultural industry, from lecturing at the University of Nottingham to doing commercial research for DuPont and being technical director for a UK agronomy company. I did not want to sever all ties just yet with my former profession and agricultural technology.

Although I had been involved in research at several points in my career, it was mainly from a project management perspective, and I still had questions in my mind about some of the things I had observed and been involved in, but hadn’t had the time or resources to explore further.

I had always enjoyed learning about crops and ways they were being managed so decided to look into doing a further degree in agronomy. I applied to the University of Warwick to pursue a taught master’s degree in agronomy. I felt it would rekindle my interest in the subject and perhaps update my skills and knowledge of the topic. My inquiry was met with a surprising response that I hadn’t considered. The university suggested, having Googled me, that I might be better suited to doing a master’s degree by research.

I soon thought of a topic and approached a potential sponsor. Syngenta agreed to support my research proposal, so I applied to the University of Warwick to do a master’s degree by research over two years (part time). At 64 I was going back to the ‘bench’ for some hands-on science. 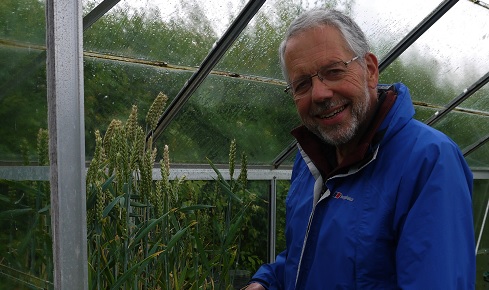 I began my work in October 2019. I needed to prepare a synopsis of how I was going to do my research and review the literature on what was already known about my chosen topic: the benefits of using fungicides in wheat beyond the aspects of disease control. Careful evaluation of my proposal by my project supervisors guided me in the direction of my first tentative experiments. I spent the first few months sowing wheat plants in pots and raising them so that I could analyse how they responded to the application of fungicides in the absence of plant diseases (which sometimes happens in the real world because weather patterns are still unpredictable in the field).

The experiments were conducted in a controlled environment under the watchful eye of the statistician so that results could be reported unequivocally and robustly. I conducted a survey of agronomists to ascertain what the knowledge base was on my topic to help guide my endeavours and see what might be of interest to them from this study.

All was proceeding according to plan when the COVID-19 crisis hit. The university suspended all teaching and asked people to work from home. Undaunted, I collected my plants in pots and installed them in the greenhouse at home (no different from the greenhouse they were in at Warwick) and continued with my studies as best as I could. I reappraised my plans to make sure I wasn’t overreaching my ambitions without the facilities of a university department. The university helped by allowing me to use portable equipment at home and I bought a small balance and the glassware I needed online.
This was an aspect of my studies I had not planned for, but with great support from the university I thought around some of the methods I needed to use and read some of the earlier papers on methods, using these to amend my studies.

Six months into my project I have evaluated the chlorophyll content of treated plants, examined the leaf layers for extent and persistence of greening, measured the roots of treated plants and measured how much water the treated plants transpire when compared with untreated controls. If nothing else, I have conducted ‘method development’ that can be rerun at the university labs when they reopen.

I have started to analyse these results and am beginning to compile a useful picture. The plan going forward is to focus on a field trial: a series of small plots treated with the fungicides of interest to cross-reference studies from the glasshouse to the field. It’s a small project and may not change the way we think about how wheat is grown. However, if it demonstrates that farmers can still get a return on their investments in fungicides, even if the damaging diseases don’t develop, it will be a small step forward.

For me, as an aging ‘NUS card carrying’ postgraduate student, the journey so far has been fascinating. The opportunity to work with the staff at Warwick and Syngenta, and among the next generation of plant scientists, is a privilege. I’d recommend it to anyone who, like me, is motivated to learn something new, even at 64 years of age.

Dr Tudor Dawkins FRSB is a postgraduate student at the University of Warwick’s School of Life Sciences.