“Everyone leaves their ego at the door and is so upbeat, even at 4am"

Adrienne Adele Cox tells Tom Ireland about volunteering at one of three new mega-labs built to scale up COVID-19 testing in the UK.

In early April the first of three mass-testing laboratories known as 'Lighthouse Labs' opened in Milton Keynes. With the help of emergency engineers, the army, and researchers from industry and academia, further sites have since opened in Glasgow and Alderley Park, Cheshire, forming what the government has called the "biggest diagnostic lab network in British history."

PhD student Adrienne Adele Cox is one of hundreds of volunteers who have 'upped sticks' to go and volunteer at the centres. When we speak she is catching up on some rest after consecutive night shifts at the 24-hour Milton Keynes facility.

Take us back to December or January – what were you were doing then and what were your plans for this spring?

I was doing my PhD up at the University of Liverpool, looking at how Pseudomonas aeruginosa senses biochemical host factors in the airway in cystic fibrosis. I was also meant to be doing a science policy internship at the Royal Society of Biology right now! That’s been deferred until next year.

Tell us about how you got involved with the ‘Lighthouse Labs’ diagnostic testing effort.

My PhD supervisor sent us an email saying that the Lighthouse Lab was expanding and was looking for more volunteers. You fill in an online form and if you have the necessary skills someone gets in touch with you. You’re asked whether you've had experience with PCR, basic molecular biology skills, and liquid handling platforms, all of which I had apart from the liquid handling platforms.

When they got in touch they asked me why I wanted to help. I said that if I have skills to help, I really would rather go out there and help, rather than be sitting at home working on my own stuff. I felt a bit redundant and even a bit selfish just working on my own research when I could be out there making a difference and helping people. As clichéd as it sounds, that’s why I wanted to get into science. That seemed to be the right answer!

So, paint a picture of how things work at the Lighthouse Labs.

It’s in a large industrial park in Milton Keynes and it's a really impressive size, definitely the biggest lab I've worked in before. There’s around 50 people in at one time working. There are different stations for the workflow, from samples coming in as a swab and eventually through to PCR. It’s like an assembly line, and we work in shifts so the lab is running 24 hours a day. I’m on night shifts at the moment and then we’ll switch with another team at the end of the month.

I’m being put up in Holiday Inn - it's great. I get a lift to the lab with my new mate who I met from Twitter. They pay for expenses and actually, the food is incredible. I think it’s ordered in from a catering company and it’s amazing. None of us expected that, but when you're working 12 hour shifts through the night and all through the day the food really increases morale and it makes a difference. 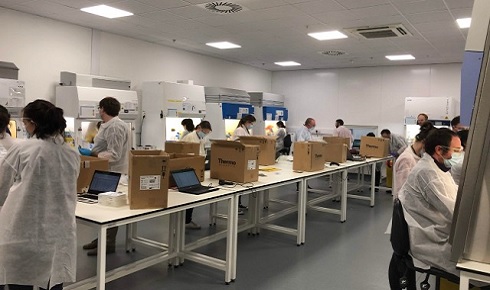 A view from inside one of the three Lighthouse Labs set up to perform COVID-19 testing in the UK
Do you do the same thing every shift?

You get trained on most stations, I'm guessing so that if you need to cover for other people you could. Twelve hours is a long time to be doing exactly the same repetitive movement – you’d never do that in normal research during a PhD or research project - and you could lose concentration.

You mentioned the food helping morale, what's the atmosphere like in general?

It's honestly the most uplifting, beautiful atmosphere. That's really weird because obviously it has come in the midst of something very serious and very, very sad.

This was a group of strangers when I came in just over a week ago. Now I go into work and I know pretty much everyone. Maybe that's my loud personality! But I know everyone, and we've got the radio on all night, and I'll be in the biohood singing along through my face mask. We’re quite happy.

And if you need anything you can ask anyone. Everyone's ego is just left at the door, and it doesn't matter if you're a professor, or if you're an undergrad – everyone is there to work towards this common goal.

The academic environment that I have known is quite competitive, and this is the complete opposite. Everyone is just so upbeat all the time, and even at four o'clock in the morning, when all the chocolate has run out, and we're all tired.

I've really never experienced anything like this before. It's like being in a completely different world as soon as you step in that building, which is a really nice thing to be a part of at this time.

I feel really lucky that I'm here - my mental health definitely took a turn for the worst when this crisis hit. I'm the kind of person who deals with things by having a routine, and I live in a studio apartment that's as big as this hotel room.

I was getting up and not having anywhere to go, and couldn't go to the gym and or work like I usually did. That was hard for a good few weeks. So, I think it has probably helped the fact that I now have a place to be.

That’s really nice to hear. Thinking about when this is over, have you had any assurances about the future of your PhD programme and your department?

When it comes to funding we've not really heard anything from my research council, but the UKRI research councils have given six months extra funding to third year PhDs.

That doesn't cover me because I'm only my second year, which is a bit disheartening because I should be in the lab right now.  I've actually suspended my PhD, and because I get paid for this volunteering at the Lighthouse Lab I can earn enough here to offset what I would be getting from my PhD stipend. I've been lucky enough to be able to stop the clock essentially.

I've got quite a few chemical probes that are sitting in the freezer that I'm hoping will still be okay by the time I go back to purify them. Other than that, there weren’t mass experiments I have to chuck away halfway through. A lot of the people in my lab back in Liverpool do work on animal models, and that's a big responsibility having to cull a lot of animals before the end of the experiment.

As to what's going to happen when we go back to work, I've not really heard anything from my university about what their plans are. I'm presuming there's probably a lot of different plans in place depending on how the next few months go. I think it's going be really weird trying to slot myself back into normal life.

Adrienne Adele Cox is studying for a PhD in medical microbiology at the University of Liverpool and is currently volunteering at the Lighthouse Labs in Milton Keynes.

For more COVID Q&As click here.
We're looking to hear from RSB members or Fellows who have shifted their research priorities or repurposed laboratories to help fight COVID-19. Contact tom.ireland@rsb.org.uk if you would like to be featured or have any information to contribute to this series.