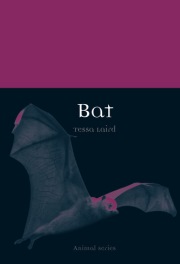 Historically, in China, bats have been a symbol of good fortune. In Australia, indigenous people treasure stories of humans being at one with fruit bats. Yet in the West, until the advent of Batman, bats were frequently treated with suspicion, fear and loathing, often thanks to their use in religious and cultural symbolism.

The roles of bats in pollination, insect population control and fertiliser production, and the economic importance of these functions, have frequently been overlooked. As reservoirs and transmitters of diseases such as rabies and Ebola, they are easy targets, which has led to unwarranted culls.

Other pressures, including white nose fungus and habitat loss, have contributed to the decimation of many bat communities. In Bat, Tessa Laird provides a well-informed and passionate antidote to this negative perspective towards Chiroptera. She lists and describes the diversity of behaviours, niches and species of bats with associated pluralist perspectives from worldwide cultures, philosophies and artworks.

It is far more than a mere collection of quirky and interesting facts. Covering 1,300- plus species of bats, stories of heat-seeking vampires, World War II plans for incendiary bat bombs, Bacardi-sponsored conservation projects and lactating male fruit bats are threaded together with artistry.

Interspersed with batty humour, it makes compelling reading. Also richly illustrated throughout, this little volume is a beautiful and worthy tapestry to depict the wonder, importance and wealth of bats in this world.

With Halloween approaching, this little volume would make a far more valuable gift than the usual frivolous bat and spider- themed items.