Dr Maelíosa McCrudden, a postdoctoral research fellow at Queen’s University Belfast, struck Gold at a competition in the House of Commons yesterday, for the excellence of her biomedical research, walking away with a £3,000 prize and medal. 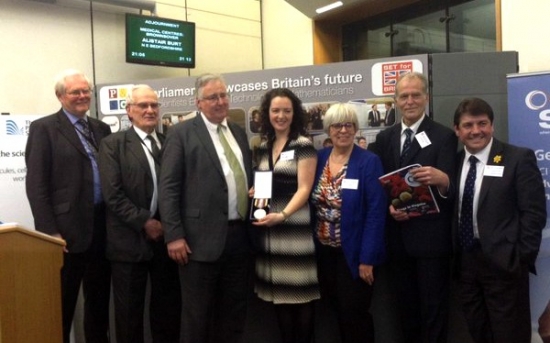 Maelíosa, hailing from County Down, Northern Ireland, presented her research on microneedles to dozens of politicians and a panel of expert judges, as part of the poster competition SET for Britain, on Monday 7th March.

Maelíosa not only won the gold award out of the 59 bioscience exhibitors, but was also awarded the overall prize across the chemistry, physics, engineering, maths, and biosciences sessions. Coming top of over 200 early career researchers, she received the prestigious Westminster Wharton Medal, chosen by the judges from the five gold medal winners at the end of the day.

As she collected her medal Maelíosa said, “I'm genuinely thrilled to have received this recognition of my ongoing scientific work at Queen's University Belfast and I would like to thank the judges and sponsors for these accolades. I feel that the receipt of these awards reflects not only on my own efforts but also those of my dedicated colleagues, who work alongside me every day. On a personal note, the fact that this has coincided with International Women's Day has given this recognition extra resonance.”

On presenting her research in Parliament, Maelíosa said: “I’m delighted to have been afforded this opportunity to present some of the innovative research I’m involved in at such a prestigious event and venue.

“I study microneedle devices, novel alternatives to regular hypodermic needle injections, which take the sting out of delivering medications. As an early career researcher, I feel passionately about communicating my work to politicians and the public to make the work more accessible and to fully exploit its potential.”

Stephen Metcalfe MP, Chair of the Parliamentary & Scientific Committee, sponsors of the Gold Award for Biological and Biomedical Sciences, said: “This annual competition is an important date in the parliamentary calendar because it gives MPs an opportunity to speak to a wide range of the country’s best young researchers.

“These early career engineers, mathematicians and scientists are the architects of our future and SET for Britain is politicians’ best opportunity to meet them and understand their work.”

Dr Mark Downs CSci FRSB, chief executive of the Royal Society of Biology, said: “Scientists and politicians both have major roles in addressing some of society’s biggest challenges, from climate change to food security. SET for Britain is a rare opportunity for politicians to meet some of our most promising early career scientists and understand their work.

“It is important that MPs make policy decisions informed by evidence, and a greater mutual understanding between MPs and scientists will improve this. The Government needs to ensure the UK continues to lead the world in biological research where we have enormous strength”.

The Parliamentary and Scientific Committee runs the event in collaboration with the Royal Society of Biology, the Council for Mathematical Sciences, the Institute of Physics, The Physiological Society, the Royal Academy of Engineering, and the Royal Society of Chemistry, with financial support from Essar, the Clay Mathematics Institute, Warwick Manufacturing Group (WMG), the Institute of Biomedical Science, the Bank of England and SCI.