Last night Michelle Hulin from the University of Bath was announced as the winner of the Best Biology Student 2013 in the SET Awards at a ceremony held at Kensington Town Hall, London.

The decision was made earlier in the day after the three finalists presented research from their undergraduate final year project and were interviewed by a judging panel at Charles Darwin House, London.

Michelle Hulin impressed the panel by describing her project which focused on preventing the global disease spread of a major commodity crop. She developed a rapid and robust molecular method to detect the pathocyte of the fungus Fusarium oxysporum which causes Vascular Wilt in oil palm. Her work has now been included in a patent application with the potential to help prevent the spread of disease from Africa to Asia.

The SET awards provide a showcase for educational excellence by publicly recognising the exceptional achievements of both students and universities. With categories covering the breadth of science, engineering and technology, fourteen students were awarded prizes in their fields. The Society of Biology arranges the judging of the Best Biology Student category.

The Society of Biology judges tasked with the tough decision of choosing a winner were Professor David Coates, Dr Gerhard May and Dr Francesco Michelangeli. The judging criteria looked at: technical depth displayed by the students; the level of achievement of the student and their project; originality that the student applied in their project; the quality of the synopsis and explanation of the background and context of the project; as well as the overall quality of candidate.

The judges felt that Michelle scored highly in all these criteria and excelled because she demonstrated a significant element of innovation involving independent work that made a real improvement to the research. Michelle should be congratulated for her work and her achievement.

After receiving the award Michelle said: “I’m overjoyed to have won the award. I’ve been interested in plant pathology for a very long time. My project helped inspire me to do a PhD. I believe crop science is really important for the future. We really need to protect our crops.”

Michelle was also the recipient of the Society of Biology Top Student Award 2013 at the University of Bath and begins her PhD at the East Malling Research Centre and the University of Reading next week. She will be investigating bacterial plant pathology, looking at the evolution of host jumps in pseudomonas syringae.

The other finalists were Nevena Karapavlovic (Newcastle University) and Eleanor Paish (Aberystwyth University) who should both be commended for delivering confident and interesting presentations about their final year projects. Nevena’s project looked at why ageing naked mole-rats maintain cellular function despite mitochondrial DNA deletions and Eleanor was investigating speed, accuracy & success in foraging fish. 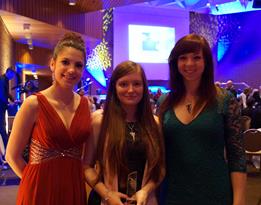 The overall Student of the Year Award was also announced at the ceremony as Laura Howarth-Kirke from The University of Manchester. Her project was from the Information and Communications Technology field and looked at Learning and Recognizing Human Gestures using the Microsoft Kinect.