A panel of experts and almost 300 members of the public discussed the scientific and ethical issues surrounding our ability to use DNA to predict cancer at the Royal Institution last night. 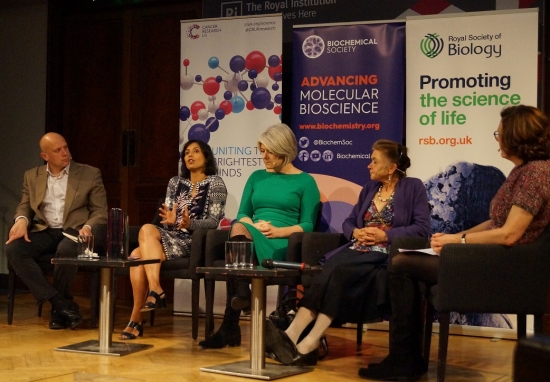 As part of the Society’s fifth annual Biology Week, broadcaster Vivienne Parry OBE chaired a wide-ranging debate around the topic ‘Can we predict people’s chances of getting cancer? Should we?’

The audience first heard about the immense progress that has been made in cancer genetics over the past few decades.

Shirley Hodgson FRSB, professor of cancer genetics at St George’s University of London, described the three tiers of genes associated with cancer, from genes very strongly associated with increased risk of specific cancers, such as the BRCA genes, to genes that may only increase the risk of cancer very slightly.

Dr Rebecca Kristeleit, clinical senior lecturer and consultant medical oncologist at UCL, explained how patients with cancer are now routinely screened to determine the genetic basis of their cancer, helping to decide the most appropriate care, but also helping to determine whether family members with similar genes are at heightened risk, too.

Professor Nazneen Rahman CBE, head of genetics and epidemiology at The Institute of Cancer Research, said that the answer to the question posed – should we predict cancer? –  ‘should always be yes’ if the information is reliable and there is something that could be done about it. She said it was comparable to other types of screening, for example pre-natal screening.

However, she said that except for genes very clearly associated with cancer, genetic screening in general populations was not currently accurate enough to meaningfully assess the risk of a person getting cancer based on their genome.

Dr Mark Taylor, deputy director of the Sheffield Institute of Biotechnology Law and Ethics, explored the possibilities that cheaper and faster genome sequencing might bring, such as insurers or employers making people take tests to assess their likelihood of disease. Life insurers in the UK have agreed not to test policy holders, but revisit this voluntary moratorium every two or three years, said Taylor. There had also already been a case in the USA of a large company testing employees for susceptibility to disease, he said.

Taylor also suggested that if people are found not to have certain cancer genes it may encourage them to indulge in more unhealthy lifestyle behaviours.

The panel answered a diverse range of questions from the audience covering topics such as personalised medicine and the non-consensual use of genetic data.

Listen to a full audio recording of the event and see how the debate unfolded on social media in our Storify.

The Biology Week debate was held in partnership with the Biochemical Society and Cancer Research UK.